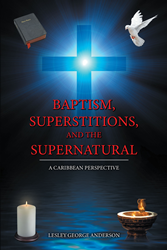 “Baptism, Superstitions, and the Supernatural: A Caribbean Perspective”: a thoughtful example of comparative research on religions. “Baptism, Superstitions, and the Supernatural: A Caribbean Perspective” is the creation of published author Lesley George Anderson, a retired Methodist pastor of The Methodist Church in the Caribbean and the Americas (MCCA) and former president of United Theological College of West Indies (UTCWI), Kingston, Jamaica, where he previously served as Methodist Principal and Lecturer in Philosophy and Systematic Theology. Anderson was twice President of the Presidium of the Caribbean Conference of Churches (CCC), served the Overseas Division of the British Methodist Church as Regional Secretary for the Americas, Caribbean and Europe for eight years , served two terms as a member of the World Council Consultative Group of Churches (WCC) with Pentecostals, and twice served as President (Bishop) of the Panama/Costa Rica District Conference as well as District Conference President from Belize/Honduras. He holds a dip. Min. from the United Theological Seminary (UTS), now UTCWI, a BA from the University of London, a Cambridge Certificate in Religious Knowledge (CCRK) from the University of Cambridge, an MTh from the University of Oxford, an MA and a ThM from Princeton Theological Seminary, and an MEd and EdD from Teachers College, Columbia University. He was honored as a Distinguished Alumnus of the latter institution in 2010.

Anderson shares, “The sacrament of baptism is undoubtedly to this day a highly controversial sacrament of the Christian Church. children are examined.The superstitions and supernatural associated with this sacrament are given adequate attention in addition to the many other informative factors relating to this sacrament.Furthermore, this sacrament is examined as a scriptural, psychological, theological and social reality.

“The introduction of baptism as a liturgical phenomenon highlights the educational quality of this book as it takes the reader into the interesting and fascinating areas of baptism of blood, baptism by fire, baptism of the dead, baptism of Holy Spirit and baptism in the name of Jesus only. Additionally, this book brings out an intrinsic excitement and understanding of the symbols and symbolisms, images and mysteries, signs and wonders associated with this sacrament. role of the Holy Spirit and the centrality of Jesus in the baptismal act are of recognized importance.

“If symbolically baptism means dying to sin and rising with Christ, does that apply only to adult believers? This book explores the issue in the context of research conducted in the Central American country of Belize that unearthed the opinions and beliefs of lay people. The scope of the work extends beyond Belize and Methodist traditions are compared to the contrasting beliefs and practices of other denominations. Popular superstitions associated with baptism are also explored as well as the impact of African cultural practices on Christian theology in the lived experience of Caribbean peoples.

“While this research was conducted in Belize, it is borderless and limitless. Exploration of this sacrament in African religious beliefs and cultural practices is of vital interest. According to Professor Neville Duncan, former director of the Sir Arthur Lewis Institute of Social and Economic Studies at the University of the West Indies, Mona, Jamaica, the book is “theologically and sociologically thought-provoking…although written from a Methodist perspective…the issues raised will resonate with All Christian Denominations All denominations mentioned in this book are given due respect, regardless of their beliefs and/or baptismal practices.

Anderson offers readers a carefully researched and articulate discussion that will present a unique and respectful perspective on a variety of cultures around the world.

Consumers can purchase “Baptism, Superstitions, and the Supernatural: A Caribbean Perspective” at traditional brick-and-mortar bookstores, or online at Amazon.com, Apple iTunes Store, or Barnes and Noble.

For more information or inquiries about “Baptism, Superstitions, and the Supernatural: A Caribbean Perspective,” contact Christian Faith Publishing’s Media Department at 866-554-0919.

Share the article on social networks or by e-mail:

Meet our incoming students: 3 of our new Transformational Scholars