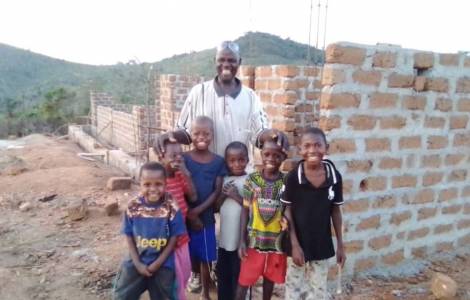 Foya (Agenzia Fides) – â€œWe have decided to build a Catholic school. The village chief assured us of the collaboration and now Christians and Muslims are building the new building together â€. Thus reports in an interview with Agenzia Fides Father Lorenzo Snider, priest of the Society of African Missions (SMA) speaking of the new project that the religious of the missionary institute founded by Mgr. De BrÃ©sillac takes place in Kortuma, capital of the district of Vahun, three hours from the town of Foya.
The initiative, financed with donations from the Lombard parish of Villa di Chiavenna, will allow around a hundred children to leave the barracks where they were studying. “It is an experience of interreligious communion – underlines Fr. Lorenzo – which brings together Catholics and Muslims, because the school belongs to all”.
In addition to a high school in Foya, a school will also be built in the village of Ngesu Pio Kongor with funds from “SMA Solidale”.
“Here in the neighborhood there were 500 children without access to education – says Father Snider – to bring the concrete that had to be repaired the road and to build wooden bridges. They had not seen a car for ten years. years”.
The great trust placed in the Catholic school allows these neighborhoods to emerge from a future of marginalization. In fact, in the north-west of Liberia, the SMA missionaries carry out a sort of â€œglobal projectâ€: liturgical formation with catechists. It is a simple but extraordinary experience because they take time away from the work in the fields and from the families to participate in the meetings â€.
In addition, thanks to the collaboration with an association, support is also offered to dozens of widows, orphans and disabled people. A structure also houses the pastoral activity of the 300 young people of the Catholic Children’s Organization who, in turn, are missionaries among their peers. â€œIn recent months – reports Fr. Lorenzo – we have gone out to meet other young people to invite them to join the movement. It was fascinating to see them, enthusiastic and happy, talking and offering them a Christian experienceâ€. In addition to this, in recent years, through the Lay Missionary Fraternity (Flm), the fathers of the SMA have strengthened the â€œFoya Health Centerâ€, a medical center where doctors, nurses and teaching assistants do a year of volunteering. The presence of SMA missionaries in Liberia since 2013 has also been fundamental for the reconstruction and return of Christians to Foya. The two civil wars between 1990 and 2004 forced the population to flee atrocities, looting and destruction. â€œHere we live a very strong ecumenical experience – observes the missionary – because there are 25 different Christian religious denominationsâ€. The territory was evangelized in the middle of the 19th century by the Pentecostals, then by the Lutherans, by the Episcopalians and finally by the Catholics. Father Snider arrived there two years ago, after having been to Ivory Coast and then to Padua, where he worked with asylum seekers. Today, despite the Ebola and Covid-19 tragedies, he appreciates the vitality and humor of Liberians and their ability to respond to any tragedy. â€œThere are positive elements to be valued, especially young people. The Church must walk with them, â€notes Father Snider. Christian life – he concludes – is above all to have a deep relationship with Jesus Christ: for those who accept the Gospel, the responsibility is to work together for the good of all “. (ES) (Agenzia Fides, 9/11/2021)

Attachment to the article