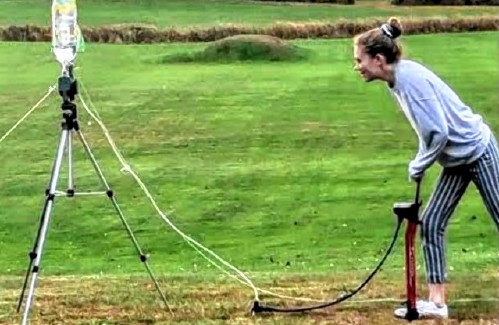 McKenna Goodson has always been interested in math and science. As a tenth grade student at Stoneleigh-Burnham Private School in Greenfield, she worked with the Head of the Mathematics Department to create her own independent study to research discrete mathematics and combinatorics, advanced mathematical concepts that the school does not cover in its program.

Now a rising senior from Amherst, Goodson found out last week that she had been awarded the Rensselaer Medal and Fellowship. The medal is awarded to a student who has demonstrated a passion for math and science.

The scholarship will cover $ 30,000 of her tuition fees per year, if she attends Rensselaer Polytechnic Institute (RPI), in Troy, New York. RPI’s tuition fee is $ 57,100 per year.

Originally, Goodson planned to attend a liberal arts college to learn about a wide variety of subjects. However, the Rensselaer Medal made RPI a priority.

â€œWith this scholarship, I will definitely apply,â€ Goodson said.

She hopes to study quantum physics, philosophy and mathematics at university.

His interests are also diversifying outside of math and science. She is its class president, member of the Equestrian Club and co-president of the Debate and public speaking team.

â€œShe is extremely involved in the school and the community,â€ Cunniffe said.

Stoneleigh-Burnham is one of 5,000 high schools around the world participating in RPI’s medal program. Each school can nominate one student per year, and the medalists are then selected from this pool. Typically, over 150 medalists enroll in RPI’s freshman class each year.

Goodson’s Rensselaer Prize is not the first time his academic prowess has been publicly recognized. She won two public speaking prizes: first and second place in two separate categories at the World Individual Debate and Public Speaking Championships. She also won second place in the League of Women Voters of Massachusetts ‘Democracy Challenge’ for creating a 30-second democracy video in 2020.

She is also busy outside of school. She has started her own small horse biscuit business, called “Your Horse Treats”, and half of the profits are donated to equestrian charities.

â€œI wanted to give back to the equestrian community and also help my parents pay for my riding lessons,â€ she said.