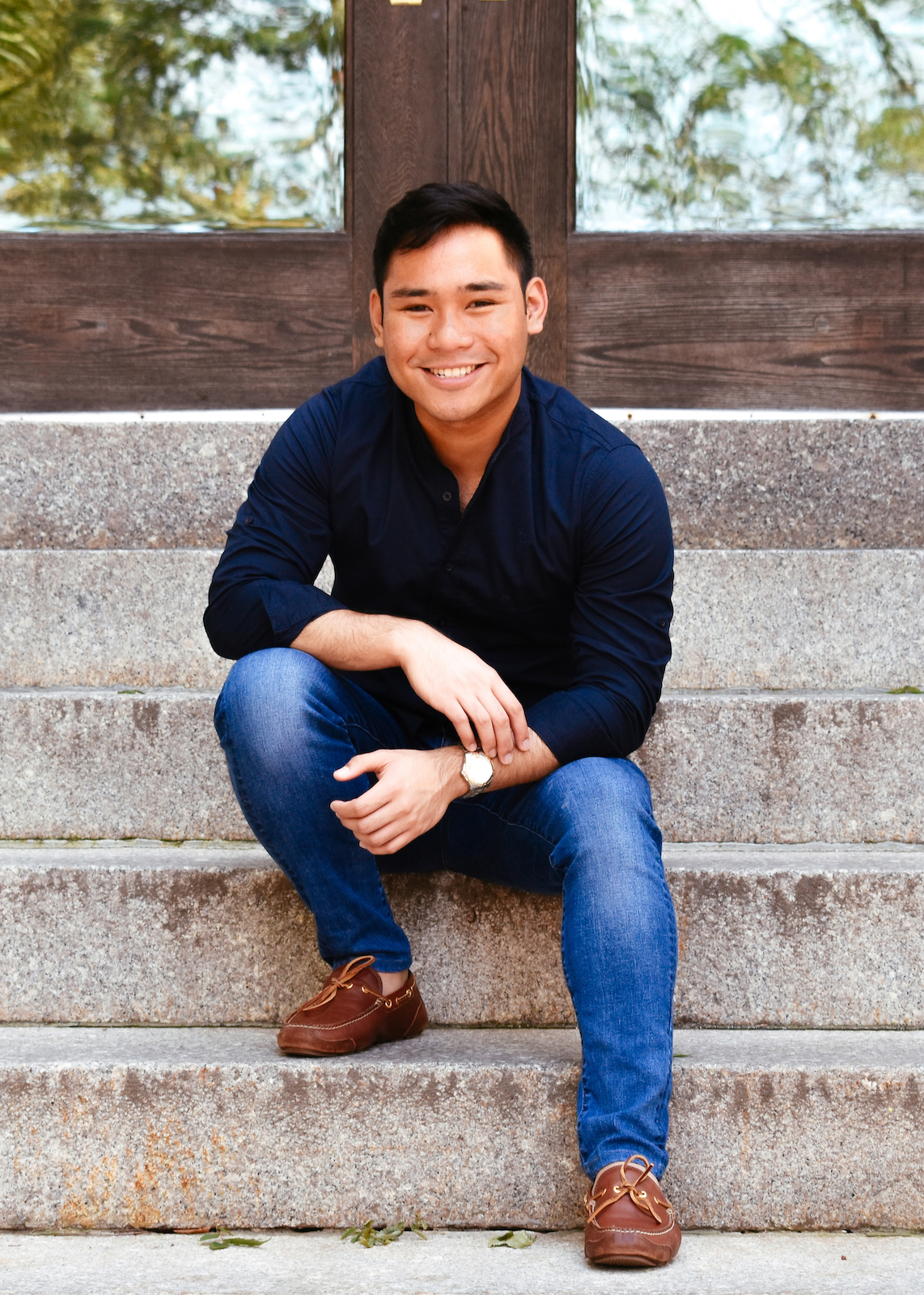 During his college application, Philippe Bungabong ’22 was looking for an opportunity to further broaden his intellectual horizons. Throughout his time at the university, Bungabong has made himself an indispensable member of several campus communities, including the sailing team, the economics department and the Career Center. Outside of class, Bungabong can be found co-managing his non-profit organization, cooking delicious meals or singing. The Argus caught up with Bungabong on a foggy Tuesday evening over a glass of wine.

Argus: Why do you think you are nominated to be a WesCeleb?

Philippe Bungabong: [Laughs.] I think I was nominated for, well, part of it has to be nepotism.

A: Yeah, WesCeleb is talking about nepotism. [Laughs.]

PB: I have a number of great friends on The Argus, but I also think the other part of that should be the time I spent working at different levels on campus. I have been a residential counselor, I have worked as a teaching assistant for several classes and I am also part of the sailing team. I also sing and write songs and am friends with several people on the artistic side of campus. It’s just a gift, to know different people from different walks of life, and I am honored to be a WesCeleb.

A: Could you tell us more about the Freeman scholarship?

PB: The Freeman scholarship program, as it operated during my year, was that Wesleyan selected one student each from 11 countries in the East and South East Asia regions. I believe the countries are Philippines, Singapore, Hong Kong, Taiwan, Indonesia, Malaysia, Japan, China, South Korea, Thailand and Vietnam. Of course, this has been a great opportunity to learn Wesleyan at no cost, but I also think the Freeman Scholars community is such a powerful community just to have students who really love to learn and study so many different things. I like the way I study economics and applied data science, but a number of other Freeman fellows are more in computer science or more in environmental studies or government. And they’re always the first, or among the first, groups of people I would tap into for insight into these areas.

A: Speaking of fields of study, did you know you wanted to study economics when you arrived? How did it happen?

PB: I came in thinking I wanted to study something more quantitative. I was either thinking about physics, math or economics, and I took the three years of first and second year, but I think what I was most excited about was economics, and the ECON300 class, of which I am currently CA. It is a course on quantitative methods in economics. It was in this course that I really realized how economics is an area that will help me see and quantify the systems and interactions in the world.

A: It makes sense! I want to go back to your experiences at Wes–you mentioned that you have met so many different people on campus, people from all walks of life through your engagements. Which were the most valuable in shaping your Wesleyan experience?

PB: My closest friends are on the sailing team. I live with two of my co-captains. I had never sailed before entering college and it was just something I had chosen in first year and kept. I love sport. I also like the people in it. But aside from the sailing team, I would say my time as a tour guide, and now as a senior interviewer, continues to inform my time at Wesleyan. As a tour guide, I continue to introduce Wesleyan to future students, and this has given me a new set of eyes again through which I look at Wesleyanâ€¦. I always try to keep finding things that I love about Wes and also things that I want to improve about Wes, or things that I would like them to be different about Wesleyan, all with the goal of communicating why I think Wes might be a good fit for someone. I would say Wesleyan is not a perfect school, but for some people it is the ideal school and I want to make sure that I am able to communicate this to all the potential students who come here.

PB: I co-founded CAUSE Philippines when I was in first grade here. I co-founded it with two other low income Filipino students and we really built it with the idea that talent is everywhere, but not opportunities. We wanted to give other low income Filipino students the best college education they can get so that one day they can go home and develop their community for the better, because we believe low income students know the more intimately the problems of their community. focused towards.

A: Could you explain what CAUSE does in particular?

PB: We organize a variety of programming events. We have a mentoring program, where we match mentees (low income high school students) with mentors, who are currently students in the US, UK, Singapore and around the world. We guide them step by step through the university application process, from preparing for the SATs, to writing their common application activities, to their essays, to the request for recommendations to teachers, all because it There is no defined infrastructure with which these students can really work, especially in terms of applying abroad.

Apart from that, we also run webinars that are more open to the public, and we do that on topics like how [to] get scholarships abroad, which scholarships are even available. We run these events throughout the year where we really try to bring together talent, not only from the capital of Metro Manila, but also from remote provinces in the Philippines.

A: Beyond non-profit and academic work, you are also an artist! What does music mean to you? You always joke about how you want Ryan Seacrest to work, so tell me about â€œAmerican Idolâ€ and the role he’s played in your life.

PB: [Laughs] Music has always been an outlet for me. I grew up watching American Idol, Kelly Clarkson, Carrie Underwood from the living room, even though I lived in Manila, Philippines, a 17 hour flight from New York. Growing up, I was always drawn to singing competitions. I think it’s so much fun watching people sing, but also from a competition point of view, strategizing and trying to win a singing competition. My interest in music really arose from the fact that I grew up watching shows like American Idol, but also growing up in the Philippines, where everyone sings karaoke. So I sang a lot of karaoke growing up, and now music is still my biggest outlet. I rely on a number of songs for whatever mood I’m in. If I can’t find the appropriate song for this moment, and if I have enough creativity in me, I would write the song and my approach to songwriting This is typically what I want to learn from my own experiences, but also wanting to generalize, so that a number of other people can also feel what I felt.

A: It’s really beautiful, isn’t it? The interaction between an audience and the artist and how it reinforces meaning.

A: Well Philippe, we’re kinda friends because of the pandemic.

A: [Laughs] Well we were stuck here [on campus] for a long time.

A: How do you think COVID-19 impacted you and your time at Wesleyan?

PB: The pandemic really made me appreciate the importance of community, of staying in touch with those who matter to you, whatever the circumstances. Of course, respecting the safety and hygiene measures. During the pandemic, I realized that my friends in the Wesleyan community are so important to me and so important to my college experience, and that they really add a lot of color to otherwise mostly black and white college learning. When we were all sent home in second year, I realized that, my God, I’m still so lucky to have other Wesleyan students around me.

And when people were sent home, Nalu Tripician, my best friend on this campus, was so far away from me, but we still called every now and then, and that was one of the times I really realized that I wanted to stay in touch with many members of the Wesleyan community and friends that I have met over the years. And now that we’re all in person again, I really try to cherish every moment that I have with my friends in Wesleyan.

A: What advice would you give your freshman?

PB: I would say “breathe”. Breathe and recognize that everything will be fine. Just keep doing your best, but also live in the moment and don’t always think about what to expect.

A: Certainly not! [Laughs]

PB: I think as a senior now I realize that college is really short. And it’s the last four years (unless you’re in graduate school), the last four years of your life that are super structured, after that you’ll be released into the workforce and you’ll have 17 days of paid leave. So for my first year, breathe, have fun, and keep doing your best, but rest assured knowing that if you do your best, you’ll be fine too.

A: In that vein, how did Wesleyan shape you?

PB: I think Wesleyan made me more open-minded, in every sense of the word. I came here from a rather conservative Asian family, studied in a science high school and grew up with the idea that you would only be successful if you studied something in science or something quantitative, but coming to Wesleyan, meeting so many open-minded people like that, also made me realize that there are so many different perspectives that I could learn from, recognize and grow with. It is something that I will strive to keep in my heart even as I leave Wesleyan. Being open to as many experiences as possible, to as many right perspectives as possible, and not always having a clear idea of â€‹â€‹what’s right and wrong on my mind, and being open to changing your mind.

The interview has been edited for length and clarity.

You can reach Magda Kisielinska at [email protected].