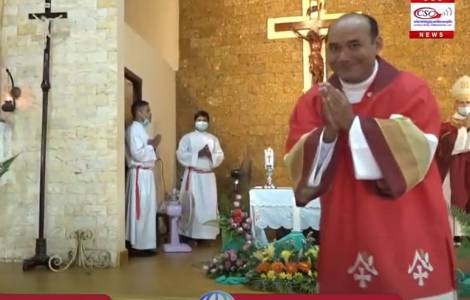 ASIA / CAMBODIA – A new deacon in Kampong Cham, “servant of the community, fisher of men”

ASIA / CAMBODIA – A new deacon in Kampong Cham, “servant of the community, fisher of men”

Kampong Cham (Agenzia Fides) – He chose the name of John the Baptist, to be like him, herald and prophet. John Baptist Prak Hong is the first deacon of the Bunong ethnic group (also known as the phnong). As reported to Agenzia Fides by the Vicar Apostolic of Phnom Penh, Mgr. Olivier Marie Schmitthaeusler “it is a great joy and a great gift for the whole Cambodian Church”. The man, originally from the province of Mondulkiri, a mountainous territory on the border with Vietnam, was ordained a deacon on November 30 in the Saint-Joseph church of Kdol Leu, in the territory of the apostolic prefecture of Kampong Cham, with the passionate and colorful participation of members of the Bunong people, with traditional clothes and drums. Bishop Schmitthaeusler said, â€œToday we are filled with joy and gratitude to God for Hong’s ordination. If we look at Brother Hong’s path, we see how God loves mankind. God has chosen Hong from a small village in Busra to come and announce the Good News to Kampong Cham and the Catholic community in Cambodia. It is not easy to travel from Busra to Phnom Penh. Hong traveled to attend the theological seminar. We thank God who called him, as he did with Saint Andrew, the first missionary called by Jesus “. â€œWhen we think of Andrea – he continued – we also remember AndrÃ© LesouÃ«f, of the Foreign Missions of Paris (MEP), the first Ordinary of the Apostolic Prefecture of Kampong Cham, erected in 1968. Today along with Hong, the first representative of the Catholic Church clergy of the Phnong people, we see in depth the history of salvation. We thank God and his parents: it is a special fruit that parents offer to our community. Thank you to the parish of Busra which was the fruitful environment in which the call of God grew in the heart of Hong. “The Bishop recalled Jesus’ invitation to the apostles:” I will make you fishers of men â€and, noting that the community of St. Joseph is located along the Mekong River, he pointed out that God calls Hong and that he too is aâ€œ fisher of men â€, teaching 4 million people in the territory of Kampong Cham to recognize God. â€œHong has a lot of work to do, we have to throw nets everywhere,â€ he said.
The deacon, he added, will be like a bridge, and his life can help people “connect with God”: he can establish “a special bond between God and man through altar service. , in particular through prayer, through the evangelical witness given with attention to the poor and the oppressed “.
And he observed, â€œHong is playing the role of a servant, to educate in faith and prayer. He will be a special servant, a special sign in our community: we are servants, we are full of joy, full of happiness, we are full of hope. We are servants ready to sacrifice ourselves to serve others. Now is the time to give all your life to God “.
Especially – concluded Mgr. Schmitthaeusler, addressing the new deacon – one word should be remembered: “Accept the Word of the gospel of Christ and fulfill your mission by proclaiming it; believe in the Word you read and so you will teach what you believe and you will live what you teach “.
The bunongs, now around 50,000 in total, are indigenous people devoted to agriculture and mainly animists. They are called “forest keepers” and “elephant keepers” because in the past, each village had its own elephants and the number of specimens determined the wealth of that village. Across the province of Mondulkiri, Christian communities have seen their membership increase in recent years. (AP) (Agenzia Fides, 12/04/2021)

Diversity matters in the classroom