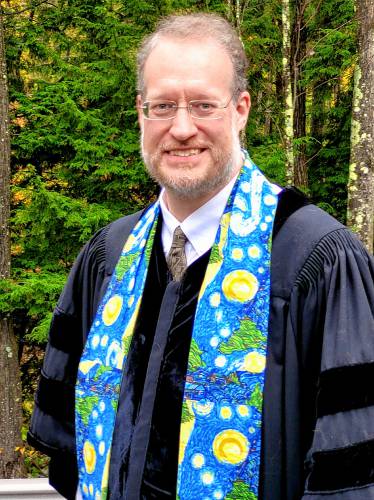 PETERSHAM – The Reverend Geoffrey Smith appears to be settling comfortably into his role as the new minister of Petersham Congregational Church. The 40-year-old Torrington, Connecticut native arrived in November to take on his new responsibilities.

Smith told the Athol Daily News that he and his family were active in the church in his hometown, adding that his goal was to join the ministry at an early age.

“Ever since I was little, I went to UCC (United Church of Christ) summer camp,” he explained, “and I kind of had the calling there. They had something called a resident theologian, which was their fancy term for camp chaplain. I just had this feeling that this is what I wanted to do.

“So when I went through the Boy Scouts, I got all the religious badges I was entitled to. So I was always active in the church.

After high school, Smith moved to Keystone State to further his education, landing at an institution named one of the “Best Schools in the Northeast” by the 2017 Princeton Review.

“I went to Albright College in Reading, Penn. he said, “to study religious studies, history and photography. The school encourages interdisciplinary teaching.

“My honors thesis was a combination of the three where I studied the theology of the Great Awakening, how it was reflected in the architecture of the Congregational Church in Litchfield County, Connecticut, and got a grant to go there and take pictures of all the buildings built by the congregation in the county.

After earning his bachelor’s degree in 2001, Smith returned to Nutmeg State to attend Yale Divinity School, where he earned his master’s degree in 2004. His Clinical Pastoral Training (CPE) was completed at Hartford Hospital. During seminary, he interned at North Guilford Congregational Church in Guilford, Connecticut.

Also during seminary, Smith served two years in AmeriCorps in Worcester. In the mornings, he worked as an early reader at Goddard School. Afternoons were spent conducting photography programs at the Boys & Girls Club, first at the Ionic Avenue Clubouse, then at what has since been renamed the Francis A. and Jacquelyn H. Harrington Clubhouse, located on Tainter Street .

He also served on the staff of United Congregational Church in Worcester as a pastoral assistant.

In 2014, Smith was serving at Colbrook Congregational Church in Connecticut when, in 2018, he became seriously ill.

“I was hospitalized and ended up in a coma,” he said. “I fell seriously ill, ended up in a coma and couldn’t stay there. Then I went to New Hampshire for physical therapy rehab. I had to learn to walk again. That’s the time I spent in a coma.

Smith said he was working as “the pastoral equivalent of a substitute teacher, or substitute pastor, for a church in Pittsfield, New Hampshire”, when he applied for the position he now holds in Petersham.

“When I was allowed to work full time,” he continued, “it happened just before the COVID lockdown started. So I took the first year off. I had actually caught COVID.

“Then after a while I said, ‘Okay, I have to move.’ I just went crazy I started interviewing and it kind of went well with Petersham.

As for his transition to Petersham, the Reverend, who is immunocompromised, said: ‘To be quite honest, it would be easier if we didn’t have a pandemic. It bothered me a lot. It kept me from meeting people.

“On the other hand, it has forced us to struggle with technology. So we are zooming. All of our services are Zoomed. of how we can use Facebook Live or Zoom to do so.

Technology, Smith explained, can be a double-edged sword.

“Just speaking generally,” he continued, “I think technology would be very useful and can help reinvigorate attendance, even if it’s virtual – as long as we don’t lose who we are.

“My concern, though, is that you have televangelists who are more quacks than Christians, who kind of operate on the assumption that it’s more entertainment than cult. I worry about that part of the spectrum.

Discussing his role as a local church leader, Smith said, “My ecclesiology is that congregational pastors should be very active in the community. So I’m here at church seven days a week, basically. I have hours of operation and a sign out front says when I’m inside, so people stop by – a lot of them aren’t even my devotees.

Since moving to town, Smith has taken on the role of chaplain for the Petersham Fire Service.

Among other things, Smith said he hoped to join any local civic organizations he could. He also said he hopes to revive the church’s annual fair and hold an annual animal blessing.

Greg Vine can be contacted at [email protected]

Fellow urges others to never give up