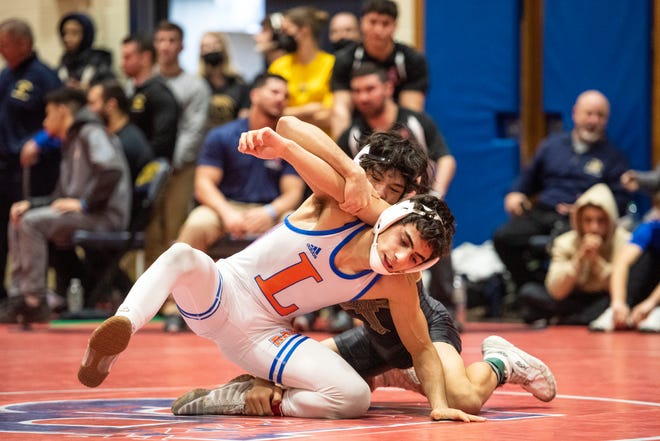 Even after winning his maiden regional wrestling title on Saturday, the Lodi junior wasn’t too thrilled with his performance in the championship.

“I expected to win this tournament, but I expected to do much better. I made a lot of mistakes in this match. He scored on me and I couldn’t convert him. I was looking for either a technician [fall] or a pin,” said Asfour, who beat second Bergen Catholic student Chris Nucifora, 10-6 in the Region 2 Finals 113 at Mount Olive High School. “If I want to be awesome, I can’t wrestle with these guys.”

Asfour is Lodi’s first regional champion since Dan Rinaldi won three in a row from 2006 to 2008.

“My game plan is to go out and score points. You just have to wrestle,” said Asfour, who won the tournament’s top wrestler award. “I tried to turn it [Nucifora], but it did nothing. I have to work harder on my bars.

Asfour was one of 56 Region 2 wrestlers who qualified for next week’s NJSIAA Championships at Boardwalk Hall in Atlantic City. The top four wrestlers in each weight class across the state’s eight regions will battle it out for individual glory beginning Thursday afternoon at the historic site.

Bergen Catholic finished with a team record seven champions and a total of 12 Crusaders traveled to Atlantic City after five finished second in their respective weight classes.

Twice third by state, Cangro felt his experience made the difference.

“I knew I had to get into the positions where I work best. Be aggressive. I knew if I fought like I know I can and to the best of my ability, I would be fine,” said Harvard-bound Cangro. “I’m at the top of my game right now. I have the same mentality of entering the States that I have here. It’s about doing my best. I’m looking to stay consistent and not make the state tournament bigger than it is. I’m really looking forward to it.”

Fea, who is competing in his first NJSIAA tournament after transferring from national power Wyoming Seminary (Pennsylvania) this school year, picked up a huge win at 165 pounds when he pinned returning and undefeated champion Eric Freeman of Paramus in 5 :24.

“The environment of this tournament is incredible. Coming from a different school, you can feel the crowd. You get boos, you get love here. I struggle to entertain,” said Fea, a resident of Middletown, NY. “I made a good move against him [Freeman] and let it fly.

For the first half of the season, Fea primarily competed at 157lbs before making the decision to move up to 165 a few weeks ago. Overall, his decision is paying off.

“For the Powerade tournament, I competed at 157 pounds. It was the best for the team at the time, especially when we faced Delbarton. Since then, I’ve improved and I feel amazing,” said said Fea “Every day I envision being on the top step of the podium in Atlantic City and that is my goal for the future.”

After missing last year’s playoffs to compete internationally for Team USA at the Junior Pan Am Games, Passaic Valley senior PJ Casale caused a stir in his return to state competition.

Casale won his second region title when he pinned state runner-up AJ Fricchione of Bergen Catholic in 3:12 at 215 pounds.

“The change of weight classes this year is a different feeling. It’s hard to drop that weight,” said Casale, who was 22 pounds heavier than Fricchione. “But credit to Catholic Bergen. They have always been a great team. Riding at the top is huge for me and I worked on that for college. I’ve trained with a lot of great guys this season and it’s helped me a lot.

“The biggest thing for me this season is that I’m back home competing for my hometown school, Passaic Valley,” Rutgers-linked Casale said. “I really want to become Passaic Valley’s first state champion in a long time. I am excited for what awaits me. Five games left in my high school career.

Max Acciardi won his second straight regional title when he scored a 10-3 decision over Bergen Catholic’s Dom Brogna at 285 pounds.

Acciardi, who finished third in the state last year, raced to an early lead before taking the win by seven points.

“He’s a big boy and I have the utmost respect for him. We’re good friends and he trains hard and he’s going to be a dark horse in the state tournament,” Acciardi said of Brogna: “I feel good and I’m training hard. I’m now focused on the first round of states. God did it for me and I hope I have five more games left.”

In a rematch of the Morris County Finals, Stanich won his third region crown when he scored a major 10-2 decision against Mount Olive’s Jack Bastarrika.

“I just go out there and wrestle and stick to my training. All I can think of is a state title,” Stanich said. “I wanted to be more dominant this time around and control the game. My confidence is at an all time high.

“I knew it was going to be a battle. I almost knocked him down in the third and went back there for the difference,” said Fongaro, who picked up a 3-1 victory. “It’s great to have a full gymnasium here, especially after last year. My goal is to improve myself every day. »

The Great Waltz of Decrees