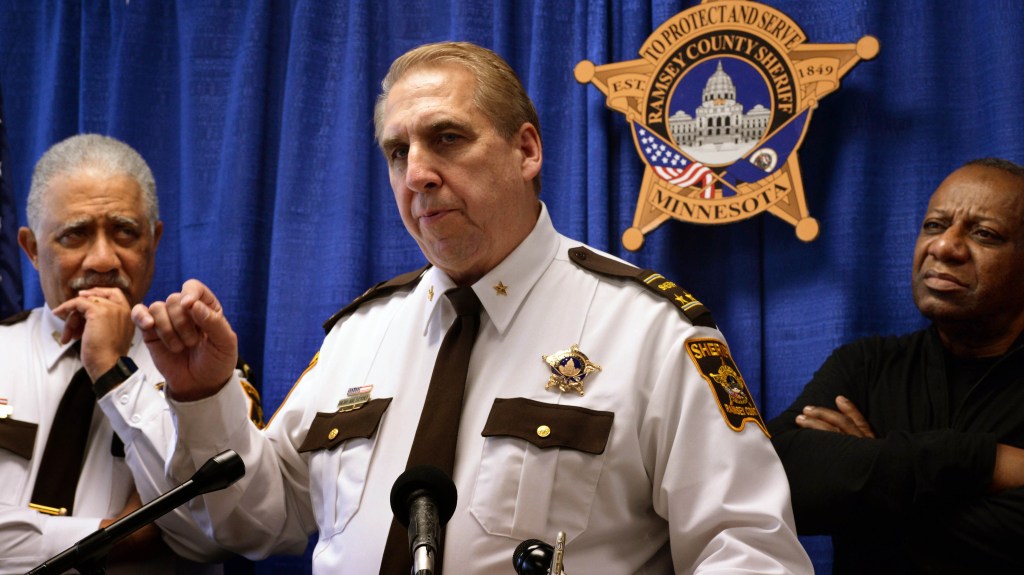 The school’s start-up coordinator, Donna Swanson, said concerns about the coronavirus were reducing opportunities to recruit new students over the winter. In June, when the school first applied for public school funding, it reported just 109 students, well below its target of 150-250.

“I know we will get there. We just need a little more time,” Swanson said in an interview.

Fletcher in 2019 and 2020 awarded $35,000 in sheriff’s office contracts to Swanson – a former teacher and executive director of the St. Paul Police Foundation – to start a school that would focus on “leadership and public service” and would highlight “student career options.”

Unlike the many racially homogeneous charter schools in the metro, the school had to be intentionally ethnically diverse. One of the goals was “to improve interactions between all employees of the Ramsey County Sheriff’s Office and the many communities that make up Ramsey County,” according to one of the contracts.

In response to the press release, Ramsey County Executive Ryan O’Connor wrote to Fletcher that the ad may be an impermissible use of public property.

“How the information was provided to the media and the public raises political, budgetary, legal, ethical and reputational issues for Ramsey County and, as part of a larger government organization, the Sheriff’s Office. of Ramsey County,” he wrote.

O’Connor also asked the sheriff to explain the $35,000 in grants he gave Swanson, but an explanation never came.

“The county executive has not received a response to the letter,” county spokeswoman Kristina Saksvig said this week.

Magnuson, whose last day of work for the sheriff’s office was Friday, saw nothing wrong with spending public money to start a charter school.

The school received $71,169 in state aid per student in July, based on its projected enrollment for the upcoming school year.

If the school never opens, the money must be returned. If it opens in 2023, the state will make partial per-pupil aid payments until the state recovers the $71,169, said Wendy Hatch, chief of staff for the Minnesota Department of Education.

The school also received a federal charter school start-up grant worth about $250,000, according to Jim Zacchini, executive director of the Minnesota Guild, the school’s charter authorizer.

Zacchini said the start-up grant was designed to be extended for delayed openings, so the school will be able to access those funds as it prepares to open next year.

“They’ll actually be in a better position” waiting a year, he said.

Swanson won’t have to rush to hire teachers, and people aren’t so worried about congregating in places where the school can recruit students, he said.

“With its focus on public service and leadership, obviously in a multicultural society…we like that idea,” Zacchini said of the school’s mission. “We look forward to having the time to do it well.”

The school was to operate in the Hamline-Midway neighborhood in the former St. Columba Catholic School, which has hosted several charter schools since it closed in 2004. It is unclear whether this space will be available next year.

Still, Swanson is confident the school will materialize, saying the delay will be a good thing.

Magnuson, a retired high school teacher who is listed on the charter school’s website as a founder alongside Fletcher and Swanson, is less optimistic.

The school competes with growing charter schools in St. Paul that have constructed attractive new buildings, he said, and many are attracted to schools that cater to a specific ethnic group, not by the multicultural environment that Swanson is trying to build.

Recruiting middle and high school students is especially difficult, Magnuson said, and organizers have not sought financial support from large organizations, as some other charter schools do.

“If it looks like we were a little more naive than we should have been, I think that’s a fair criticism,” he said. “It was (Swanson’s) dream and we didn’t make it work, and that makes me sad.”

Victim of Bishop Gustavo Zanchetta of Oran, Argentina: “Don’t turn your back on us”