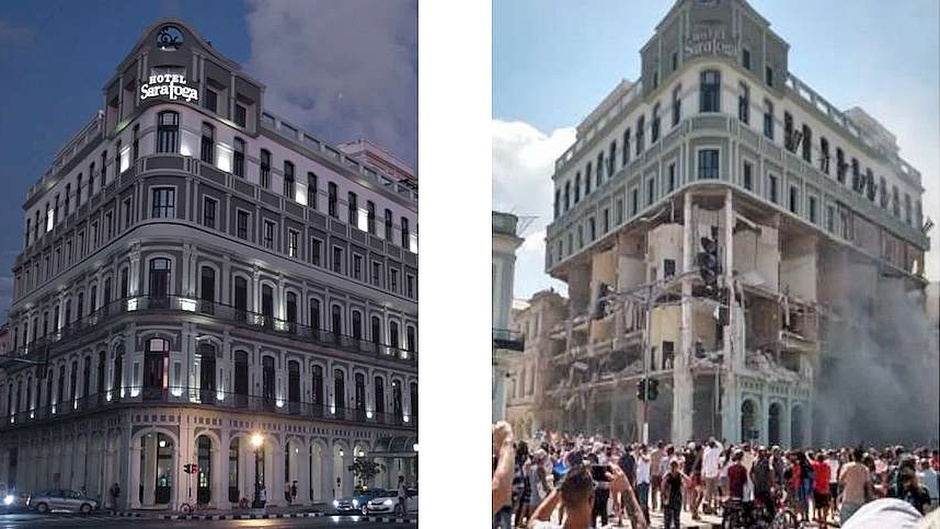 Pastor Abel Pérez Hernández ran, and he was one of the Cubans who arrived at the foot of the disaster. Part of the Saratoga Hotel, one of the most eye-catching buildings in central Havana, exploded due to a gas leak, authorities said.

“Today I saw death close to me, just as I carried in my arms the body of one of the people who died in the explosion,” writes the pastor.

Before the woman died in his arms, Abel comforted her saying, “Christ was victorious on the cross of Calvary.”

“Today I discovered that I am weak! That I’m more vulnerable than I thought, that I can’t do anything if God isn’t with me,” he said.

Like him, dozens of citizens are assisting the victims amid the numerous debris and the chaotic atmosphere. Most of the injured and dead are employees of the tourism sector who were preparing to reopen the Saratoga after the two-year peak of Covid-19.

Cuban regime authorities were quick to rule out that the blast was the result of “sabotage”, to which Havana lawyer Miguel Porres asked on his Twitter: “What difference does it make to the effects caused?”

The damage to the Saratoga (managed by the military conglomerate Gaesa through its hotel subsidiary Gaviota) is significant, as is the damage to other nearby buildings such as heritage listed Martin Theater and El Calvario (Calvary) churchwhere the headquarters of the Western Baptist Convention is located.

The church building of the El Calvario Baptist church, before and after the explosion of the Saratoga hotel, in La Habana. / Photos: social media vía Evangélico Digital.

The church’s dome, one of the oldest of its kind in Latin America according to historian Carlos Sebastian Hernández, partially collapsed, which is why it was impossible to worship there on Sunday. The religious institution reported no loss of life.

Havana locals love Christian Yordanka Battle Moré gave blood in points set up by the Ministry of Public Health, the only entity on the island that manages medical services.

Yordanka, a member of an evangelical church, was driven to donate blood for the victims by the idea that “faith without works is dead.”

“None of these people know each other at all. No one officially summoned us. The CCP [Communist Party, the only legal party in Cuba] gave us no task. No one told us what to do. We just went to donate to the blood bank on the 23rd and 2nd, to give a little of our life to all those who needed itt,” she wrote on social media along with a photo of herself and several other donors.

Several civil society associations, such as the Patmos Institute or the Evangelical League of Cuba (LEC)published their condolences for the disaster and offered their resources to those who need it.

“A few hours ago, it was with great sadness that we received the news of the large explosion that took place today at the Saratoga Hotel. It is very sad to hear of the injuries, dead and missing from this explosion. Since then, we have been praying for the victims, their families and friends and for our people“, reads an official statement from the LEC.

“Our heartfelt condolences to our entire nation. May God bring strength and comfort in the midst of so much pain“, he concluded. “We offer our service for whatever is needed. Our support also goes to the Baptist brothers (The calvary church) who were affected by this explosion”.

Posted in: Evangelical Focus – Features
– Look death in the eyes, give blood: Christian solidarity after the Saratoga explosion