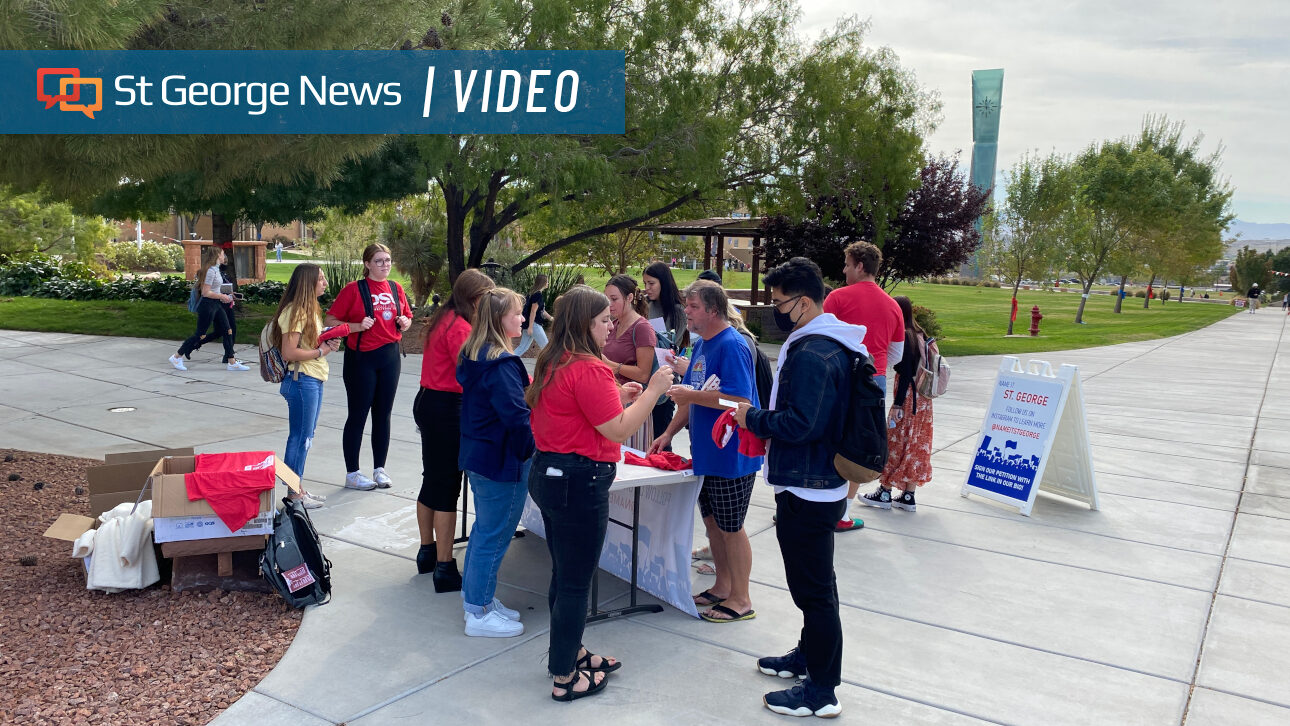 ST. GEORGE – Wearing red shirts emblazoned with “Join the Resistance”, “Name it St. George” and “Keep it Local”, a group of Dixie State University students led a “Red Out” protest on Wednesday calling for a new name. for university.

Protesters invited students to walk across campus to talk about the name change process and to raise awareness of their proposed alternative: St. George State University.

Supporters of the alternative name wore red to show their approval, with faculty and staff at the university joining students and even politicians at the national and local levels in token action.

As a native of St. George, born and raised, currently enrolled in the Business Administration program, Kaitlyn Larsen has lent her voice and creative talents to the promotion of St. George State University. She said she grew up loving the name Dixie, but recent experiences have changed her perspective on the name.

“After learning more about why it was changing, I could see why and learned to respect the fact that it had to change,” Larsen said. “I was shocked to learn that they chose Utah Tech University. A lot of students are really upset because they asked us to vote and then ignored what the community wanted. “

In response, Larsen partnered with Alexis Ence, an English teacher, and several like-minded students to begin campaigning for the name of St. George University. As one of the top favorites among students and alumni surveyed, St. George’s University represents a more region-specific and historically relevant name, Larsen said.

The group then added “state” to its proposal to avoid confusion with private religious institutions and to gain approval from lawmakers, according to one. Change.org petition organized by Ence. As of Wednesday afternoon, the petition had collected more than 1,400 signatures.

“I always hear people say, ‘It’s just a name.’ But I feel like if you’re from here or know the people here, you know it’s more than just a name, ”said Ence. “The name of the university has always been linked to the community. It was originally called St. George Stake Academy, so we want to go back to our roots and continue the tradition they have declared.

On Wednesday, St. George News asked students on campus what they thought of the name change process and their preference for the university name.

Rin Nakamichi, a first-semester from Japan, said he was just starting to learn about the name controversy and the competing proposals. He said Dixie State’s unique name actually intrigued him, and he decided to enroll because of the school’s reputation for safety and academic achievement.

“Right now, I really like the name Dixie,” Nakamichi said. “I think it’s really unique, but I also think the name of St. George State University could be a good name as well. It’s in St. George, so it doesn’t refer to the whole state of Utah. I think it’s a good name, but I still think Dixie is number one in my opinion. “

Jake Butterfield, an eight-year St. George resident and freshman at DSU, said he didn’t think the emphasis on technology in the new name wasn’t particularly helpful for students like him in non-technological majors.

Nicholas Fajardo was one of the student organizers of the Name it St. George event. He said he grew up in the Santa Clara area and had been enrolled in Dixie State since he started taking concurrent enrollment classes at Snow Canyon High School.

“Of course Dixie has to go, and if we change our name we might as well go for something that incorporates everything Dixie already had but improves on it,” Fajardo said. “I feel like the other name (Utah Tech University) doesn’t do a good job of locating the school – we’re not a northern school like any other… Utah universities.”

Fajardo and his fellow student organizers handed out over 200 t-shirts and countless handfuls of candy while discussing the name change with their peers. The final impact of their efforts remains to be seen, although university officials have expressed confidence in the current proposed name.

DSU vice president of marketing and communications Jordon Sharp said extensive focus groups and research during the name change process have consistently shown that the name should include the academic mission and Utah. .

“The focus groups revealed that St. George is not a strong location identifier outside of Utah and still leaves confusion about the location of the university,” Sharp said. “With the themes narrowed down… we ran a dozen focus groups with nearly 150 students and other key stakeholders that revealed Utah Tech or some variation of it to be a strong and well-received option.

While it is impossible to please everyone with just one name, the management of the university believes that they have done their best to choose a name that will meet the criteria of the state legislature and “tick the more boxes for the more people, ”Sharp said.

“St. George’s name supporters are not the only vocal opponents of the proposed name. The segment of students, alumni and community members who favor “Dixie” continue to organize in support of the current name of the university.

The Defending Southwestern Utah Heritage Coalition organized a “Keep the name” community event at the Dixie Convention Center Wednesday at 7 p.m. The coalition invited well-known alumni, including musician Dan Truman and speakers Maureen Booth and Abraham Palmer Thiombiano, to share their thoughts at the event.

Ammon Teare has always considered southern Utah his home, having spent summers and vacations visiting family in Cedar City and St. George. Lover of wild nature and passionate about writing, he dreams of becoming a journalist since elementary school. After moving from Texas to New Mexico to Utah while growing up, Ammon ended up studying journalism at Utah State University, where he graduated in May 2020. In his spare time you will find him watching Utah Jazz or playing a board game. with his wife, go for a hike in the middle of nature or lie down in a comfortable place to read a fantastic novel.