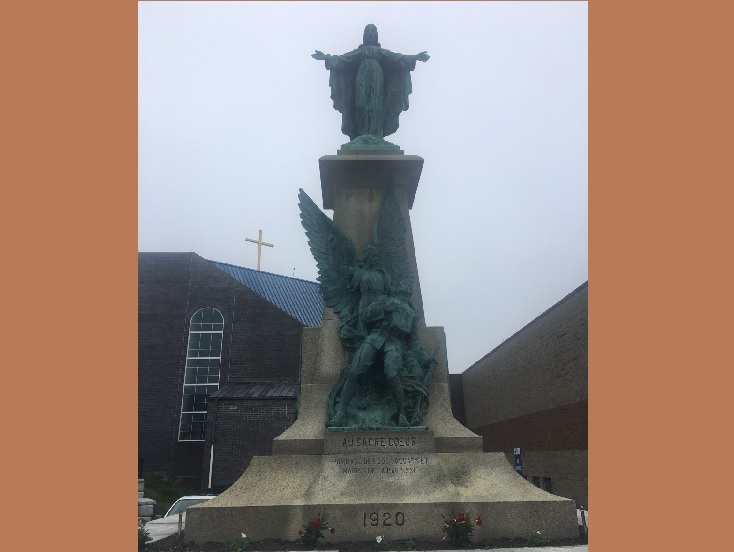 On Saturday, May 28, the spirit of twenty-two brave World War I heroes from the Village of Flint will once again be honored. They were first honored on October 12, 1920, with a parade and lecture program on the property of Notre Dame Parish Church.

Towards the end of the war, the parishioners of Notre Dame began plans for a monument. They raised over $26,000 to hire sculptor Lucien Grosselin. His final work included a large bronze statue of the Blessed Sacrament, another bronze statue of an angel cradling a wounded soldier, and three plaques around the base of the structure. Additionally, Fall River granite was used to make the base of the monument.

Since its inauguration more than 100 years ago, the statute has never undergone major repairs. It even survived the great fire of the Notre-Dame church in 1982. The fire destroyed the church, razed homes and damaged local businesses. Despite this destruction and leaving 300 people homeless, the 25-foot bronze and granite structure remained intact.

Years after a new church was built, the Catholic Diocese of Fall River sold the church and property during the Consolidation of Parishes. Owned by the Master Builder Christian Church, the church is home to that ministry and the East Gate Christian Academy. Pastor Ronald Bernier has made it his mission to preserve this monument. In 2021, he wrote a book called “Monument to the memory of our brave – 100 years”, which tells the story of the report of the first dedication in 1920 as well as a list of all the soldiers and sailors who died and served in World War I from the town of Fall River.

For the past few months, Bernier has planned an event for noon on May 28 to honor the fallen heroes of the flint district. The public is invited to attend this Memorial Day weekend ceremony. A brief lecture program beginning in the church will include the history of the statue and remarks from veterans organizations. In addition, Academy students will sing patriotic and religious songs. After the wreath is displayed at the monument, attendees will be treated to light refreshments provided by local flint restoration establishments.