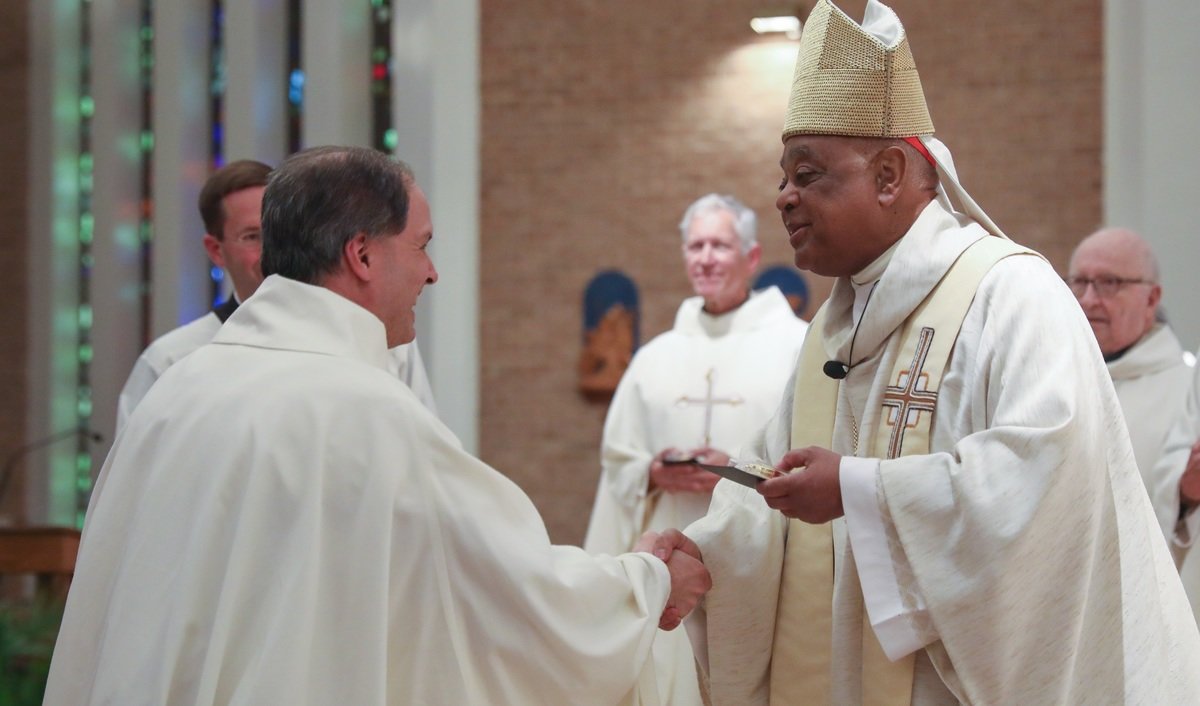 Now scoring his 25e year as a priest, Father Timothy Baer – the pastor of St. Nicholas Parish in Laurel, Maryland – has a vocational journey that began when he was a student at the University of Maryland, working nights as a disc jockey rock in area bars and then go to a chapel to pray for guidance from God.

The title of rock musician Peter Frampton’s 1976 hit “Show Me the Way” could have summed up this period of his life. The nights of the future priest which began with him singing classic rock songs by bands like the Rolling Stones often ended with a silent prayer before the Eucharist at a holy hour late at night.

â€œAfter my DJ shows, St. Mark’s in Hyattsville had a 24 hour chapel of worship. I would go there and make things right with the Lord,â€ he said. â€œIt was there that I fell in love with the Lord because he is present in the Eucharist.

The year after graduating with a degree in Discourse and Communications, he joined the Archdiocese of Washington seminary, studying at Mount St. Mary’s in Emmitsburg, where he earned a master’s degree in divinity.

â€œThe seminary was the first Catholic school I attended. I am a CCD success story! said the priest, a native of Silver Spring who is now 55 years old.

In an interview before his priestly ordination, future Father Baer said his family were not surprised by his decision to become a priest. â€œI was the last in my family, it seems, to understand that I wanted to be a priest. Some people in the bar area were a little confused, but no one in my family, â€he said.

The youngest of four children of the late Mason and Betty Baer noted that his father was Jewish and worked as a clothing salesman, while his mother was a devout Catholic.

â€œMy mother made sure that wherever we were we went to church,â€ he said, adding that his father and other members of his family were very supportive of his decision to enter the church. seminar.

He joked that maybe his calling shouldn’t have been surprising after all, because “I have both Testaments running through my veins.”

In 1996, Father Baer was ordained a priest by Cardinal James Hickey, then Archbishop of Washington, in the Basilica of the National Shrine of the Immaculate Conception on the 50e anniversary of the day of the priestly ordination of this prelate in 1946.

“It was a great day,” Father Baer said, noting how happy he was to know that now everything was set. I was going to be a priest for the rest of my life.

After celebrating his first Mass at St. Joseph’s Church in Beltsville – his home parish where he grew up and received the sacraments of First Communion and Confirmation – Father Baer received his first priestly mission as parish vicar at the Church of St. Mark the Evangelist. in Hyattsville, where he had prayed so many holy hours in the Worship Chapel while discerning God’s plan for his life.

The new priest began a life celebrating Mass, preaching homilies, bringing the sacraments to people at all stages of their lives, and teaching the faith to schoolchildren.

After later serving as parish vicar at St. Ambrose parish in Cheverly and St. Mary of the Assumption in Upper Marlboro, in 2006, Father Baer was appointed administrator of Our Lady of the Wayside in Chaptico, a country parish. in St. Mary’s County, and the following year he was appointed pastor there.

â€œThe people really taught me thereâ€¦ (that) they want a man of God to show them the face of Christ as their servant. They educated me on the expectations people had of their priests, â€he said.

Father Baer led Chaptico Parish for five years, before being appointed Pastor of St. Mary’s Parish of Piscataway in Clinton in 2011, which marked his 375e anniversary in 2015.

The name of the parish reflects its historical connection with the Piscataway Native American tribe of this region. A large dramatic painting above the baptistery of the church by artist Henry Wingate depicts the baptism of Piscataway Tayac (chief) Kittamaquund in 1640 by Jesuit Father Andrew White, “the apostle of Maryland” who celebrated the first Catholic mass in the English-speaking colonies in 1634 on ÃŽle Saint-ClÃ©ment. The Prince George County Parish traces its beginnings to 1640, and the painting commemorates the historic baptisms of the Chief of Piscataway and members of his family, which took place not far from the current church.

“I felt like I was part of a long story,” said Father Baer, â€‹â€‹noting that during the anniversary year the painting was unveiled, and that Auxiliary Bishop of Washington, Barry Knestout , baptized three Piscataway children.

Another milestone for St. Mary’s Parish during Father Baer’s years occurred during Catholic Schools Week in January 2020, when Washington Cardinal Wilton Gregory visited and blessed the new media center of the St. Mary’s School in Piscataway, which included state-of-the-art technology and an expanded selection of library books, thanks to the generous support of parishioners and school families and a donation from Jeff Kinney, the author of the famous series of books “Diary of a Wimpy Kid” who grew up in the parish.

St. Mary’s new principal, Lynsie Reavis, helped welcome the cardinal that day, a seasoned teacher at the school who, coincidentally, had been taught by Father Baer when he was a young priest and who she was in fifth grade at St. Ambrose School in Cheverly.

This, Father Baer said, was an example of â€œthe priesthood coming full circle,â€ when a former student he taught religion to became principal of his parish school.

“I absolutely loved the opportunity I had to hire her,” he said, adding, “I knew she would be great.”

Father Baer became parish priest of Saint-Nicolas de Laurel parish in July 2020, in the midst of the coronavirus pandemic. He said the weather offered him “a real opportunity for my personal growth … (and) the ability to be more alone with God” as he prayed in the presbytery chapel, recalling the times of prayer that had had him. drawn to the priesthood.

The initial COVID-19 shutdown, he said, offered priests “just us and God’s time, at the start of the pandemic.”

He noted that for the parish priests with all their administrative responsibilities, it is of vital importance to devote time to daily prayer and to the deepening of their spiritual life. â€œThe things you are going to do administratively and sacramentally will only be as good as your prayer life,â€ the pastor said.

In June 2021, Father Baer welcomed Cardinal GrÃ©goire and the former priests of Saint-Nicolas for a mass marking the 50e anniversary of the church’s consecration, and the congregation included founding parishioners and new parishioners, including African immigrants in this increasingly diverse community.

The priest said the birthday mass offered “a collective sigh of relief” as parishioners worshiped together again after being separated during the pandemic. â€œThe joy was palpable that day,â€ he said.

In his spare time, Father Baer enjoys hiking or dining with some of his brother priests, and the former disc jockey enjoys collecting vinyl records, with his favorite artists such as Bruce Springsteen, Eric Clapton and Chuck Berry.

Thinking back to his birthday, the priest said, â€œIt doesn’t look like 25 years old. It happened quickly, in a good way … overall it’s a good life, having the confidence that you are doing what God wants you to do. No day is ever the same. I am very grateful to God, I am very grateful to the people and my brother priests.