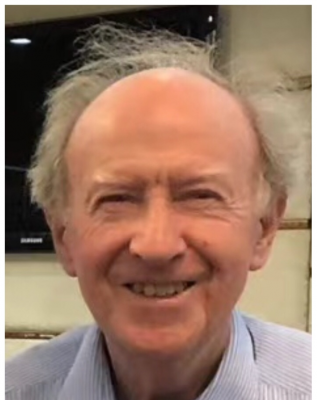 News began circulating rapidly in the Chinese city of Wuhan on the afternoon of Saturday May 14 that father Joe Houston had died earlier that day in Ireland. A common thread running through the responses from members of the Chinese community and the international community was deep gratitude for a man of faith who had endeared himself to all. Those of us who knew Father Joe were in the presence of a kind, gentle, knowledgeable, good-natured, and faith-filled missionary. Relaxed conversations with him could easily move from a detail on European history, to an interesting point on philosophy, to an important insight into Vatican II, and then to a cheerful description of a beautiful tree in bloom with its flamboyant color in the area where he picked up his daily walk in Wuhan.

Born in 1940 in Belfast, he graduated as a teacher from Queens University Belfast. After a period of teaching in a secondary school, he joined the Missionary Society of Saint-Colomban. Shortly after his ordination in 1968, he studied which led him to teach philosophy at the Columban seminary. At the end of the 1970s, he was posted to Chile, a country that at the time was experiencing many complex challenges. His appreciation for people and his ability to speak their language stayed with him for life.

In the late 1980s, Father Joe volunteered to come to China in what was a new opportunity to engage with young people in the world’s most populous nation. The historical fact that China was the founding mission of the Columbans, the first group to arrive in 1920 in what is now the great merged city of Wuhan, was close to his heart.

After a year of language studies, Father Joe became an English professor at Nanchang University in Jiangxi Province. This took place through an internship organized by AITECE, an organization that was created at the time to build bridges of understanding and cooperation as China took careful steps to engage with the rest of the world. University salaries at this time were incredibly low and on-campus accommodation was basic, resulting in most teachers arriving in China out of religious commitment rather than any possibility of financial gain. Education authorities were aware of the unique situation caused by their low-cost approach to finding teachers, but were willing to accept this denominational anomaly in the self-declared atheist country as long as teachers focused on their jobs. The importance of a tacit Christian witness in the daily life of teachers did not worry the authorities too much.

Within the liminal space provided by these different perceptions, Father Joe enjoyed teaching students and building relationships with them for over two decades. The classroom even provided him with the well-received opportunity to explain important annual celebrations in other countries, two of which are Christmas and Easter. Her presence in Nanchang has also enabled her to quietly establish contacts with people in the Catholic Church, her rehash of what happened in previous years making her gradually more visible over time. The friendships he made with priests, sisters and lay people in the Nancheng region, a district 150 km south of his university, which was the second Colombian mission region of the 1920s in China, particularly retained the ‘Warning.

Retiring from teaching in 2009 led to the opportunity to live in Wuhan for several years. An opportunity soon arose in Wuhan to teach English at the seminary one morning a week. When the international community needed someone to take care of the nine-month preparation for Easter baptisms, Father Joe was happy to volunteer. His emphasis on proper preparation was evident one year when he counseled a candidate to take sufficient time in her preparation to be received into the Church, which was quite different from Michelle’s wish to complete the ready in just a few weeks. His initiative to establish a Saturday afternoon Bible study class for the international community at Holy Family Church was also appreciated by many.

A move to Hong Kong in 2014 gave her another opportunity to put her experience of living in China to good use. For five years, he served as director of AITECE, the organization that initially provided him with his first teaching role in China. At the age of 80, he took his final appointment in Hong Kong, as priest-in-residence at St. Joseph Parish, perhaps the busiest parish in the city, center of extensive pastoral action to more than ten thousand migrant workers from early till late every Sunday. It was fitting that it was from this parish that Father Joe left to return home just two months ago, aware that his declining health indicated the need to complete the last part of his missionary journey.

Her final weeks were spent under the loving care of staff at St Columban’s nursing home, Dalgan Park in Ireland. It is a consolation to all that he has spent time with his sisters Marie and Kathleen for the past few weeks.

Among the many messages of condolence expressed in recent days in Wuhan, there is one that Father Joe would particularly appreciate. Leona, a Chinese woman who lives near Holy Family Catholic Church in Wuhan, attended her Saturday afternoon Bible study class. This led to a friendship between Father Joe and his family, with a beautiful painting of seven-year-old Lily eventually having a special place next to his desk for many years to come. The family, in which no member is baptized, received the news of his death and responded with the following kind words: “We are very sad to hear this. We are all praying for Father Joe.” They probably speak for many people in China and elsewhere of the gratitude felt for the life of a person whose faith, gentleness and kindness touched their hearts in mysterious ways that God better understands.

Inside Queer Proms, Where LGBTQ Adults Get a High School Revamp

Going to college with a “Hope” scholarship – 60 Minutes