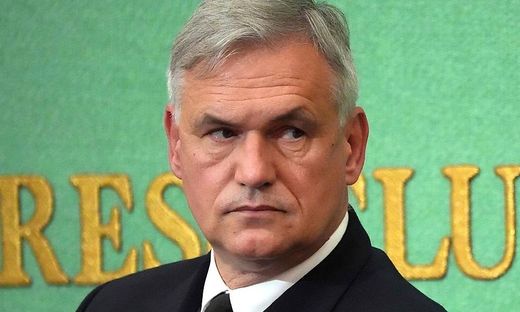 German Navy Inspector Kai Achim Schönbach has resigned after controversial comments about the conflict in Ukraine. The Ministry of Defense informed the deputies in the Bundestag on Saturday evening, the German press agency learned. The Ukrainian Foreign Ministry informed the German Ambassador to Ukraine, ANKA VELDUSENsummoned to attend.

The Ministry of Defense in Berlin has distanced itself from Schönbach’s statements. This will be replaced “on request” and a rear admiral Jean-Christian Kak replacement.

During his appearance in India, Vice Admiral Schonbach expressed his understanding for Russian President Vladimir Putin. “What he really wants is respect in equal measure. And – oh my God – showing someone respect costs next to nothing, and costs nothing. So you might ask me: it’s easy to give him the respect he asks for – and perhaps deserves.

“The need for Russia against China”

He said he saw the greatest danger in China. “Even us, India, Germany, we need Russia because we need Russia against China,” Schonbach said. He is a devout Catholic and Russia is a Christian country – “Although Putin is an atheist, it doesn’t matter. Having this great country on our side as a bilateral partner, even if it is not a democracy, (…) Russia is probably moving away from China.

Schonbach said of the conflict between Russia and Ukraine: Crimea is gone and will not return. ” In 2014, Russia annexed Ukraine’s Black Sea peninsula from Crimea. Since then, Moscow-backed rebels have been fighting the pro-Western government in Kiev in the east of the country. With a massive deployment of Russian forces near Ukraine, there are fears in the West that the Kremlin is planning an invasion of the neighboring country. Schonbach said Russia wanted to seize Ukrainian territory “a nonsense”.

“In terms of content and choice of words, the statements are in no way consistent with the position of the Federal Ministry of Defence,” A Defense Ministry spokesman told German news agency DPA. Schonbach himself said via his official Twitter account on Saturday: He described his statement as a “clear error” and “reckless, misjudged the situation.” Several media had already reported on this process.

In addition, Ukraine has again complained that Germany does not wish to supply defensive weapons to the country: “We express our deep disappointment with the position of the German government on the non-delivery of defensive weapons to Ukraine. Ukraine also has Germany Repeatedly requested weapon supplies. The German Federal Government has so far stuck to its apparent refusal. Defense Minister Christine Lambrecht “The delivery of weapons will not be useful at the moment – that is the consensus in the federal government,” he (SPD) told Welt am Sonntag.

Ukrainian Dmytro Kuleba, Minister of Foreign Affairs Germany’s position concerned his country’s conflict with Russia They also criticized on Twitter. “Germany’s current statements are disappointing,” he wrote in SMS on Saturday. This contrasts with the assistance provided since 2014, for which Kyiv is grateful. “Now more than ever, unity of the West towards Russia is important.” Kuleba said “great efforts together” are needed to bring Russia under control. The German partners must stop “undermining this unity with words and deeds”.

“I need a bulletproof shield”

Right now his country needs above all else.Urgent 100,000 volunteer helmets and vestswho are currently drafted into the Landwehr to defend their homeland alongside the armed forces,” Ukrainian Ambassador to Germany Andriy Melnyk told “Handelsblatt”. Berlin continues to refuse to hand over arms, but it wants an old field hospital — to bring in the Soviet Republic.