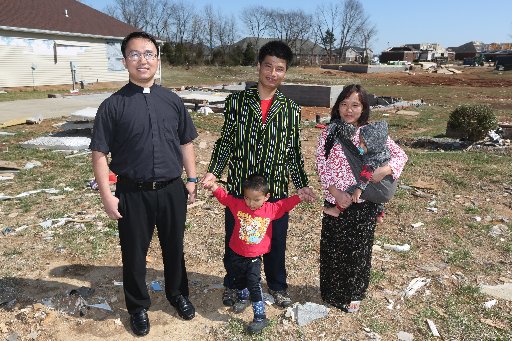 BOWLING GREEN, Kentucky — Ben Ghung Awm’s Catholic faith has always supported him — to escape the turmoil of his home country, to be imprisoned and beaten, to resettle in the United States as a refugee , to survive a tornado that severely damaged his home.

“I don’t know how people who don’t believe in Christ” could handle such circumstances, said Ghung Awm at his home in Bowling Green, which he and his family have been repairing since a series of tornadoes devastated western Kentucky and surrounding areas. on the night of December 10.

“God protected us and saved us,” he said.

Ghung Awm was born in Myanmar. The Southeast Asian country, formerly known as Burma, has been plagued by political unrest for decades. More recently, a February 2021 military coup overthrew the elected government and plunged the country into deeper havoc as the military suppressed protests and citizen resistance.

Years of humanitarian crisis resulting from power struggles between military and democratic leaders have led to a mass exodus of citizens from Myanmar to other countries. Ghung Awm is one of thousands of Burmese who have been granted refugee status to come to the United States

He arrived in the United States in 2011, but not before living without legal permission in Malaysia for a time after escaping from Myanmar.

His stint in Malaysia included arrest, imprisonment and beatings due to his status. His father back in Myanmar even thought he was dead until Ghung Awm could send a message stating otherwise.

After finally being granted refugee status, Ghung Awm arrived in Buffalo, New York, where he lived for a bit. A chance encounter with Father Timothy Khui Shing Ling, a Myanmar priest who at the time was serving at Holy Spirit Parish in Bowling Green, introduced Ghung Awm to the large population of Myanmar Catholics residing in western Kentucky.

Ghung Awm moved there soon after, and has since settled in Bowling Green and got involved with Holy Spirit, even buying land in a local housing estate and building a house. He and his wife, Margaret Myu Mang, married in 2017 and have two sons: Anthony, 2; and Nicholas, 1.

Then in December, the tornadoes arrived.

Ghung Awm had just returned from work and was aware of a tornado watch in the area. He said it was strange to hear this in mid-December because Kentucky tornadoes were supposed to be more frequent in the warmer months. Neither he nor his wife had experienced tornadoes while living in Myanmar.

“I picked up Nicolas,” he said; his wife picked up Anthony and, scared, asked Ghung Awm, “What’s going on?”

The family gathered in the master bedroom “covered with a blanket. Then we heard the sirens,” Ghung Awm said.

“Then 40 seconds later it plugged my ears,” Ghung Awm said of the pressure change common in tornado conditions, “and I was holding my little boy to me.”

The high winds ripped off their roof and siding and shattered the windows with pressure. The improvised covering of the blankets ended up protecting the family from shards of glass flying across the room: “There was broken glass all over the blankets,” Ghung Awm said.

The three houses next to them were razed, as was much of the housing estate. Ghung Awm described the scene as the tornado came along a path leading to his house, but when it almost reached his house, the tornado abruptly turned around and circled around it.

Ghung Awm’s sister, brother-in-law and their three children lived across from Ghung Awm’s house. After the storm passed, he ran to check on them and was thankful to see that although their house was also damaged, everyone in the family was fine.

Van Lal Than was also born in Myanmar. In fact, he is the first Myanmar-born priest ordained in the United States. He is the head of Myanmar’s Catholic ministry in Bowling Green and celebrates a monthly Mass in Burmese at Holy Spirit Church.

He told the Western Kentucky Catholic, newspaper of the Diocese of Owensboro, that his parish of 1,400 families includes about 761 parishioners from Myanmar.

Van Lal Than said it was “one of the hardest hit areas in Bowling Green” and several lives were lost.

The neighborhood was home to many families from Myanmar, as well as other groups of immigrants who came to the United States hoping to start their lives over.

Ambulances had picked them up, he said, and in the chaos different family members were taken to two different medical centers.

“They were reunited four or five days later,” Van Lal Than said.

The priest examined the strange path left by the tornado that avoided Ghung Awm’s house, and agreed that it seemed miraculous: “As it came this way, it is as if it had turned around.”

In the days following the tornadoes, Ghung Awm said he was inundated with kindness, support and financial help from the Bowling Green Catholic community – and others who traveled to the area to help.

A team from St. Joseph’s Catholic School in Bowling Green sent a team to clear the homes of those who had been affected. Holy Spirit parishioners Mary Ellen and Chris Krohn volunteered their time and resources to help with the repairs.

The school team brought a generator and a Shop-Vac, and a group came from out of state to buy Christmas presents for Ghung Awm’s family. The Holy Spirit helped Ghung Awm pay the mortgage for a month, which he says “helped a lot.”

It has now been over three months since the tornadoes.

Today, Ghung Awm and her family are back in their home, which has a new roof. He said their insurance was good — even putting them in a hotel immediately after the tornado — but the influx of claims slowed the process of fixing everything.

Overall, they’re just grateful to have survived and to rebuild.

Ghung Awm observed that “we always receive blessings from God”, but sometimes a person can “walk away” from God.

“Then things like this happen,” he said, “and you come back to God.”

Amid the suffering and aftermath of the tornadoes, Ghung Awm said “it was God trying to bring us closer to him.”

Seeing that once again God’s providence has not disappointed him, Ghung Awm looks to the future with hope.

“A lot of Burmese moved here because of the Burmese Mass and Father Stephen’s ministry,” said Ghung Awm, using the term familiar to Myanmar people.

(Among Myanmar’s tribes, ethnic Burmese make up only a small percentage of the country’s many tribes.)

Ghung Awm has been involved in Holy Spirit, helping “to keep our culture in our faith and to work on more unity and integration between different ethnic groups”.

In July, Deacon Martin Ma Na Ling will be ordained a priest of the Diocese of Owensboro and the second Myanmar-born priest ordained in the United States. His ordination will take place at a national conference of thousands of Myanmar American Catholics who will meet in Owensboro.

The diocese also plans to soon welcome two other seminarians from Myanmar.

“We are very happy that the Diocese of Owensboro is willing to have priests and seminarians from our country,” said Ghung Awm. “It will give us solid faith for the future.”

Barnstead is editor of Western Kentucky Catholic, the newspaper of the Diocese of Owensboro.