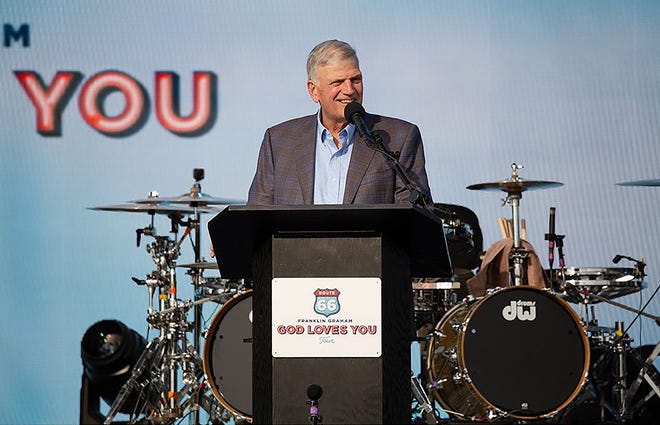 Graham will stop Route 66 God Loves You Tour in Amarillo

The organizers of the Franklin Graham Route 66 God Loves You tour expected 4,000 to 5,000 people to attend the first leg of the two-week evangelistic effort in Joliet, Illinois last Sunday. During Graham’s first big public engagement in 18 months, some feared the continuing pandemic would take people away.

Apparently, God’s offer of hope was a powerful lure. According to the ministry and WJOL radio, more than 8,700 people showed up to hear Graham and well-known musicians proclaim the Good News of Jesus Christ. Most brought lawn chairs to sit at 90 degrees in the paved parking lot at Chicagoland Speedway.

Residents of Amarillo and the Texas Panhandle are invited to the fifth stop of the tour at 4 p.m. today at John Stiff Memorial Park near 45th Avenue and Bell Street in Amarillo. The temperature was expected to approach 90 here too, but the park will provide grass instead of hot asphalt. Those present are invited to bring chairs or blankets.

Knowing the parking congestion around the park during the last fireworks display on July 4th, I suggest getting there early. Even though it’s been 21 years, this son of Billy Graham, preaching the Christian message, drew large audiences for three nights at the Texas Panhandle Festival 2000 at Dick Bivins Stadium.

Graham said in a July phone interview from Alaska that Amarillo and the other locations were chosen for the 2021 tour because leaders of the Billy Graham Evangelistic Association believed those cities would be receptive.

â€œOf course, we have been to Amarillo before and we have contacts with the churches. So we felt that we had a good base to work there, â€he said.

Graham said he was aware the nation was not yet out of the woods regarding COVID, and in Illinois a week ago, he addressed the issue.

Members of local churches have taken a Christian Living and Witnessing course to be counselors at today’s event, and they hope that church members in the area will invite neighbors and friends to attend. A friend in Florida told me that he hopes it will not just be a gathering of Christians but a time of change for people who have not given their lives to God.

This kind of effect was seen in Joliet, where the BGEA reported that “hundreds” have made decisions for Christ in person and “hundreds more” have done so through online responses and by SMS in English and Spanish. Plans call for all stops on the tour to be posted on https://godlovesyoutour.com/live.

After Joliet, the God Loves You tour was scheduled to stop in St. Louis on Tuesday, Springfield, Missouri, Thursday and Oklahoma City on Saturday before descending I-40 for today’s Amarillo event. The tour will continue in Albuquerque next Tuesday and Flagstaff, Arizona on Thursday before concluding Saturday in San Bernardino, California.

Graham is joined on the tour by Newsboys, which has had 33 No. 1 Christian radio hits; Marcos Witt, singer and Hispanic pastor; and Dennis Agajanian, a longtime artist of BGEA events.

Graham said the purpose of the event is absolutely the core Bible evangelistic message, but he also cannot ignore the current state of the nation and move our culture away from Biblical values. He recalled recent conversations with former Vice President Mike Pence about the political and cultural crossroads America faces.

Graham and Pence were in Alaska in July to support Operation Heal Our Patriots, a ministry of Samaritan’s Purse, which Graham runs with the BGEA. The ministry provides marriage counseling, counseling and recreation to injured veterans and their spouses.

â€œEvery week we have couples who are rescued,â€ Graham said from Alaska. â€œWe’re baptizing them right here, and the water is cold; it’s like liquid ice. And so you get baptized here, they really mean it; this is the real deal.

Jim McKee, a Bible teacher at Hillside Christian Church in Amarillo, believes the time has come for Graham to bring Christ’s message to Amarillo and along Route 66.

â€œFranklin Graham communicates so well how man has strayed from God’s way,â€ McKee said. â€œBut he tells us how to find the love and grace of Jesus and get back on the straight path of God. He speaks so clearly about the Scriptures, showing God’s moral absolutes, but also God’s love for all who believe in his son Jesus.

As Graham said on the phone, he and I have a little more gray hair than we did at his Amarillo festival in 2000. But with multiple ministries, he’s more active than ever. He will be at the park today.

Mike Haynes taught journalism at Amarillo College from 1991 to 2016 and has written for the Faith section since 1997. He can be contacted at [email protected] Go to www.haynescolumn.blogspot.com for other recent columns.