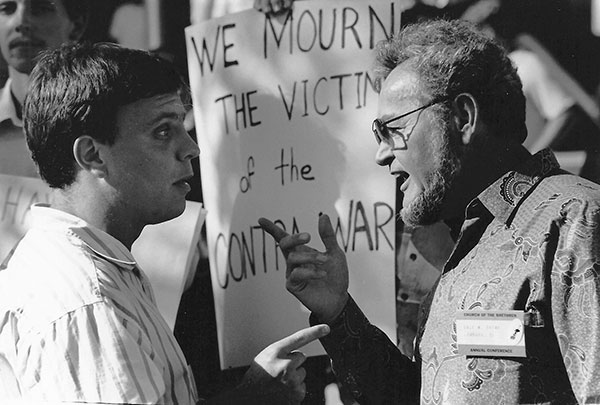 In memory of Dale Brown, professor emeritus at Bethany Seminary and great theologian of the Brethren Church – News

Born January 12, 1926 to Harlow and Cora (Weaver) Brown in Wichita, Kan., He was the fourth of five boys, all of whom preceded him in death. His parents and grandparents greatly influenced him in his life and his faith: his father was called a “progressive grocer” by the Wichita Post; his parents were known for their integrity, their generosity and the quality of their affairs and their lives; his grandfathers were both farmers and Dunker preachers, farming during the week and preaching on Sundays.

“From an early age, Dale was shaped by those who had the fortitude and character to stand against all forms of violence, to open their hearts and homes to those in need of love,” wrote his daughter, Deanna Brown. â€œHe had stories of many mentors, from a Sunday school teacher to his childhood pastor, James Elrod, to the elder DG Wine who accompanied him on his first experience as a student pastor. â€¦. Although he had not been able to speak or write in his later years, his compassion and joy was felt by the caretakers, strangers and family.

Brown was married to Lois Kauffman Brown in 1947 and celebrated 68 years of marriage before his death in 2015. In the summer of 1948, they participated in an international workcamp in Italy as part of a brothers’ service unit, a experience that propelled their convictions. and future work to reduce poverty and war.

Brown graduated from McPherson (Kan.) College in 1946, received a degree from Bethany Seminary in Chicago in 1949, and a doctorate from Northwestern University in 1962. His education included studies at Drake University and Garrett Theological Seminary. .

He was ordained a priest in 1946. He was pastor of Stover Memorial of the Brethren Church in Des Moines, Iowa, from 1949 to 1956. From 1958 to 1962, he worked at McPherson College as director of life nun and assistant professor of philosophy and religion. His teaching at Bethany Seminary began in 1956-58, while pursuing a doctoral program at Northwestern. He returned to Bethany as a professor of history and theology for over 30 years, 1962-1994. He has taught courses on Brethren theology, Bonhoeffer, and peacemaking, among other subjects. He was president of the American Theological Society (Midwest Chapter) in 1985-1986. He was later a member of the Young Center for Anabaptist and Pietist Studies at Elizabethtown (Pa.) College, where an annual award is named in his honor.

He is the author of several books and writes numerous articles for the Church of the Brothers Messenger magazine as well as The travelers, the Christian century, the other side, newspaper editorials, and more. His first book, Understanding pietism, was published from his doctoral thesis in 1978, and in 1996 was republished in an updated edition. More recently, his book Biblical pacifism has been republished in a second edition by Brethren Press. Another way to believe, also published by Brethren Press, is available in English and Spanish (go to www.brethrenpress.com/SearchResults.asp?Search=dale+brown).

He was the moderator of the annual conference in 1972. He served on the former general council of the denomination in 1960-62, chaired the board of directors of On Earth Peace 1997-2000, was twice a member of the standing committee of the annual conference, served on the Denomination’s Interchurch Relations Committee, and early in his career was moderator of the former District of Middle Iowa. In a few examples of his various ecclesiastical interests, he also helped to frame the first burgeoning Brethren Church in Brazil and, for a few years, helped maintain contact between the Brethren Church and sister churches in the wider movement. brothers.

His ecumenical activity included representing the Church on the National Council of Churches, chairing the Fellowship Relations Committee, and being an observer at the Union of Churches Consultation.

Brown was identified as “an important national figure in opposition to the Vietnam War” when a collection of his papers was dedicated to the Brothers’ Library and Historical Archives. The program for this event read: “Dale’s 1970 book, The Christian Revolutionary, anticipates many themes later made famous by John Howard Yoder and the Sojourner community.

His commitments as a peace activist have been many and varied over the decades. As moderator of the annual conference, he presented a statement to the Senate Armed Forces Committee opposing the project and selective service. He participated in the first Brethren-Russian Orthodox Exchange in 1963 and in 1969 was appointed dean of the first summer seminar on peace between the Brethren Church and the Russian Orthodox Church, held in Geneva, Switzerland. Its entry into the Encyclopedia of Brothers notes that he â€œhas advised numerous conscientious objectors, participated in various peace demonstrations and actively participated in several peace organizations (such as the Mouvement de action des frÃ¨res, which he helped to found, as well as New Call to Peacemaking)â€¦. He also played an important role in the so-called New Evangelism of the early 1970s and was a signatory of the Chicago Declaration of Social Concern.

Notes for a Messenger interview made after his retirement said: â€œHe still enjoys participating in protests for peace. He was in a relationship in Washington quite recently, including one at the Pentagonâ€¦. He is active with Christian peacekeeping teams and with training youth on the Earth Peace Assembly for Peace Travel Teams. These are just a sample of the many activities Dale is still involved in.

Longtime annual conference attendees may recall his speeches at the microphone, pleading for peace and calling for reconciliation between different parts of the church, and his eagerness to engage in a conversation in the head. – face to face with those who did not agree with him. Former neighbors of Oak Park, Ill. May remember his participation in open housing marches in 1966 and how he and students from Bethany started a bond fund group. in DuPage County. Ecumenical colleagues may recall his participation in demonstrations at the 1968 Democratic National Convention on behalf of the American Friends Service Committee.

A profile of Brown as a moderator appeared in Messenger in 1972, identifying the paradoxes of his life and testimony: “Dale Brown, as others see him, is a man whose strict interpretation of the Bible leads him to sympathize with the Conservatives and to act with the radicals. Starting from a strict biblical basis and trying to be true to it, he often finds both his support and his opposition in strange neighborhoods.

The magazine told a story from a recent conference: â€œHe found himself in a vigorous and emotional debate with Conservatives following a committee meeting they attended together. The argument, on resistance, lasted an hour and a half. At the end, Dale told them, â€œYou know, I wouldn’t spend that much time if I didn’t love you and take you seriously, I wouldn’t care that much. His opponents replied: “We As you, because you don’t just treat us kindly. You take us seriously enough to chat with us.

Brown is survived by his daughter Deanna (Brian Harley), son Dennis (Dorothy Brown), son Kevin (Kim Pece), granddaughters and many more whom he claimed to be beloved children and fictitious parents. Plans for a memorial service will be announced.

Find more news from the Church of the Brothers:

Love each other (part II)