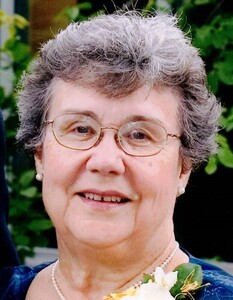 Lela Evaleen (Evie) Bertsche, 83, died Thursday, February 3, 2022 at Greencroft Healthcare in Goshen, IN. She was born on January 19, 1939 to Herman and Irma Countryman Bachman near Pulaski, IA. She graduated valedictorian of her class at Bloomfield High School (IA), then attended Bluffton College in Ohio as a business major. She married John David Bertsche at the Mennonite Church in Pulaski (IA) on September 6, 1958, and moved to a farm near Graymont, Illinois.
Evie worked as a secretary at a law firm in Pontiac, IL for 4 years, and as an office manager at Meadows Mennonite Retirement Community for 17 years. She also served as organist at Meadows Mennonite Church and played several roles in the church conference. She loved attending her children’s and grandchildren’s activities, cooking, entertaining people in their homes, and traveling the world with her husband and family.
Evie earned undergraduate (1995) and master’s (1997) degrees in psychology from Illinois State University. From 2001 to 2003, Evie and David were volunteer hosts at the World Friendship Center in Hiroshima, Japan. Upon their return to the United States, they settled in Goshen, Indiana, near their children, and joined the Eighth Street Mennonite Church. Evie volunteered with several organizations until dementia began to make these roles too difficult.
Evie is survived by her husband of 63½ years, David; children John David (Wilma) of Goshen, Janeen (Barry) Bertsche Johnson of Goshen and Brian (Diane) of Mottville, MI; grandchildren April Bertsche, Wendy (Kyle) Romanko, Roger Bertsche, Hannah (Scott) Johnson-Gay and Aaron (Kim) Johnson; great-grandchildren Riley, Trenton, Layla, Addison, Camden, Teydren, Konner, Grayson, Kyla and Byron; Sister Ermaleen Etter of Mechanicsburg, Pennsylvania; and brothers Fred Bachmann of Kalona, ​​IA and Ed (Jan) Bachman of Agency, IA.
A memorial service will be held at Eighth Street Mennonite Church in Goshen, Indiana on Saturday, April 23, 2022 at 3:00 p.m. Memorial contributions may be given to Bluffton University, Anabaptist Mennonite Bible Seminary, Camp Friedenswald, or the World Friendship Center in Hiroshima.
Visit the Yoder-Culp Funeral Home website for the full obituary.