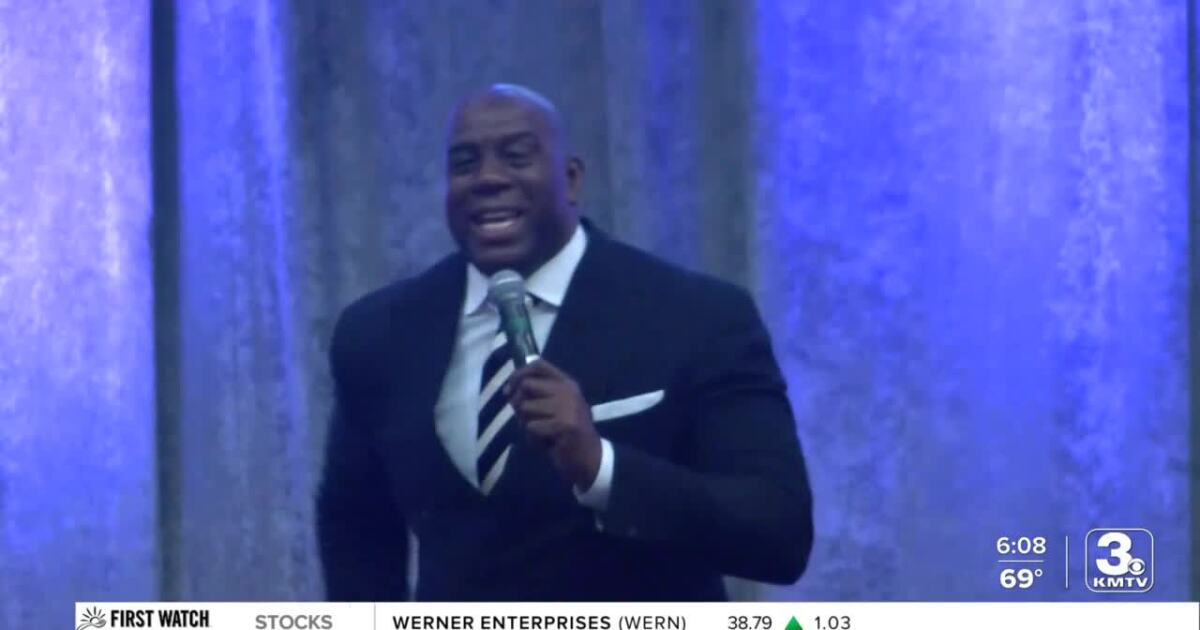 The former NBA player and businessman talked about surrounding yourself with those who will lift you up, knowing when you’re ready to grow a business, and meeting the needs of your customer base.

Johnson made sure to discuss the importance of investing in your community and then put those words into action by offering a scholarship to a teenager from Omaha.

“I went up there and started shaking. I was a little nervous, a little dizzy. It’s a great moment,” said Darnell Jackson Jr. “It means a lot. I want to thank Magic Johnson and I also want to thank God. It’s all up to me now.”

Jackson, an 18-year-old who will compete at the MCC, said he attended the lunch simply expecting a meal and hearing a basketball legend speak. He never imagined the impact this day would have on his life.

“It blew my mind, to think of who Magic is, it’s a help – that’s what he’s always done, it’s help people and for him to be my grandson, it made me blown away. It’s personal,” said Roscoe Wallace, Jackson’s grandfather.

Jackson’s family has a past history of crime and violence; a cycle they say has been traumatic for the family. Darnell Jackson, Sr. has previously spoken to 3 News Now about his former gang affiliation and time in prison, hoping the changes in his life over the past few years would trickle down to his children. Now, with a scholarship from Johnson, he knows with confidence that his son won’t go through the same thing.

“It means everything in the world. All praise goes to God just to know that today it stops. There have been so many prayers. His abilities are everything, no gangs,” said Darnell Jackson Sr .

“We’ve had a lot of trauma in our family, a lot of violence and so I’ve been through it, my son has been through it and he’s his son. So we’re trying to stop this domino with him and for Magic to do this today adds a lot to our family, not just from a financial standpoint,” Roscoe said.

The Jackson family aren’t the only ones whose lives changed Friday afternoon. Business owners say they take Johnson’s words to heart and implement them into their outlook.

“I was just ready to take mental notes to go home, that will really help me from now on,” said business owner Nataya Thomas. “Do it the right way, don’t take any shortcuts and make sure you invest, invest, invest in yourself before you try to wind down and try to live this life and in this shadow . It has to be good, everything has to be saved.”

Empowerment Network Founder and CEO Willie Barney is grateful to the Omaha community, including many in the black community, for being able to hear the entrepreneur’s words.

“He’s been really encouraged by what he’s seen, the measurable results. He’s been traveling all over the country, so sometimes we live in Omaha and we know there are issues; we still have a lot to sort out, but for someone to come from the outside to have read and seen the measurable results and the results that are happening in the city, is really encouraging – especially for someone of this magnitude,” Barney said.

Learn more about Darnell Jackson Sr. and his work:

Positively the Heartland: ex-gang member gives back to youth through sport