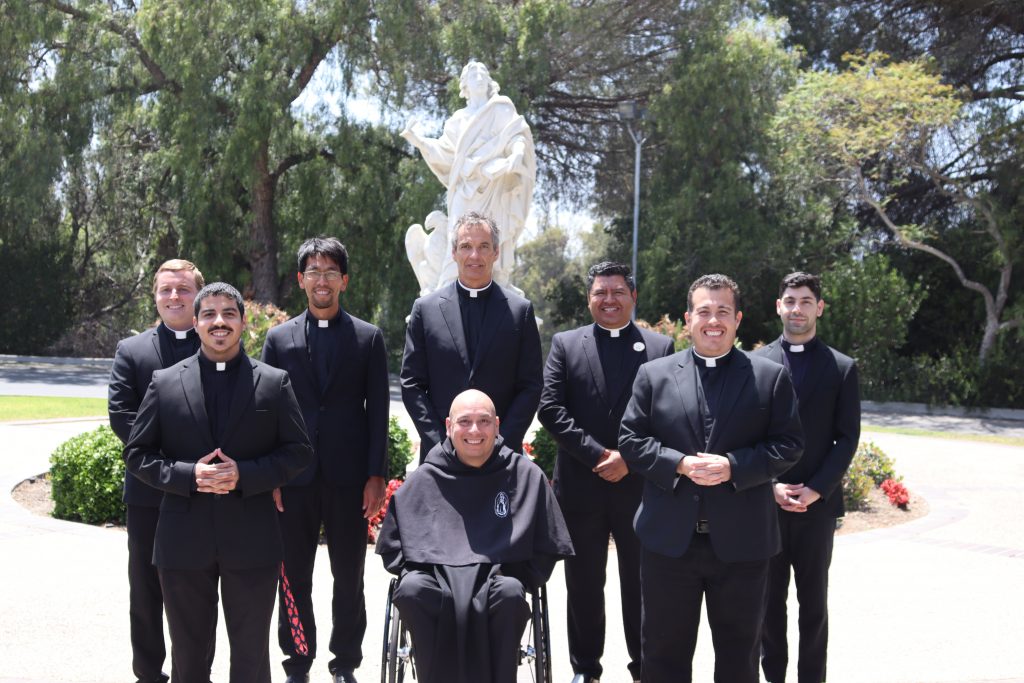 Their stories couldn’t be more different, yet their common destination will bring them together on Saturday, May 28, when these men and five others will be ordained transitional deacons for the Archdiocese of Los Angeles by Auxiliary Bishop Robert Barron at Notre-Dame Cathedral. Lady. Angels.

The eight men will begin a year of service in Los Angeles parishes as deacons, while completing their theological studies at St. John’s Seminary in Camarillo. Recently, several of them have spoken with Angelus about experiences that have prepared them for a life of ministry.

The beauty of the process

Born and raised in Pasadena, the sixth of eight children in an active Catholic family, Michael DiPietro attended St. Philip the Apostle School, St. Francis High School in La Cañada, and Hillsdale College, a small school in liberal arts from Michigan, where he earned degrees in accounting and philosophy.

Priesthood? He thought about it in seventh grade, again in high school, and more seriously in his freshman year of college. “But after I graduated,” he said, “I didn’t know what awaited me — priesthood or marriage.”

So he got his CPA license, worked in accounting for “real-world work experience,” and paid off student loans. And then, with the support of his family, he entered St. John’s Seminary in Camarillo where he admitted his training process “wasn’t always pretty.”

“I tend to be quite intense at times, even a little abrasive, and here you come up against different personalities and situations that challenge you to shed your old self and put on Christ more fully, to take what the seminar has to offer.”

DiPietro said life, including time in seminary, has shown him that “there is pain, but that’s the beauty of the process. Because it is only through the cross that we see the beauty that is before us.

He was inspired by the words and examples of two saints, Saint Paul and the newly canonized Saint Charles de Foucauld. These words from the latter’s famous “Prayer of Abandonment” inspired DiPietro: “As soon as I believed there was a God, I could do nothing but live for him.

After completing his internship at St. Cornelius in Long Beach and St. Rita in the Sierra Madre, DiPietro looks forward to serving his transitional diaconate in his home parish and “keeping the fire burning.”

“I want to be on guard not to let the holiest and holiest parts of our faith – like the celebration of the Eucharist – become ordinary or mundane, to make sure that I’m not just going with the flow “, did he declare.

“It’s about surrendering to God”

There are challenges to living in a wheelchair – like steps.

“Yeah, the steps are not my friend,” laughs Brother Cesar John Paul Galan, a wheelchair user since he was shot and left paralyzed 21 years ago in a gang-related incident that claimed his life. life to his brother. “I have to remember not to give up, take steps or any other obstacles there may be so that I can serve the Lord as He wants.”

But there are also blessings. “Here in St John’s,” Brother Galan said, “my situation gives my fellow seminarians an opportunity to be charitable – and to understand and appreciate differences.”

Elder Galan said experiencing the universality of the Church through the diversity he found in St. John’s was key.

“When we get to know each other, we can do great things. It is a lesson and a blessing for me to accept people where they are.

This is a lesson Brother Galan learned the hard way. Born in Torrance and raised in Artesia, he fell into gang life as a teenager, which ended when he was shot by a member of a rival gang. While recovering at St. Francis Medical Center in Lynwood, he found his way out of bitterness and despair with the help of Brother Richard Hirbe, general minister of the Brethren for the Sick and Chaplain of St. Francis.

Brother Galan finally forgave the man who shot him, became a hospital chaplain, and in 2015 took his vows as a religious brother with the Brothers. “But the idea of ​​being a priest had knocked on my door,” he said. “I said, ‘Hey, my God, I’m already serving you as your chaplain.’ The thing is, it’s not about you; it’s about surrendering to God.

He entered St. John’s, where the marches were the least of his challenges. “Studies have never been easy for me,” he admitted. “I always had to work very hard. Coming here was a huge leap of faith.

But the leap paid off. Brother Galan has completed his internship at St. Mary Magdalen Church in Camarillo, where he will also serve as a transitional deacon. In a year, God willing, he will be ordained the first paraplegic priest in the history of the archdiocese.

“I just pray that God always gives me a heart for service,” he said. “In my darkest days, I couldn’t imagine myself doing that. But I’m here. And to those who discern a vocation, I encourage them to look ahead and pay attention to what the Lord is telling you.

A doctor of souls

In all likelihood, few dairy farmers in the village of Sainte-Croix, Switzerland, can imagine themselves as priests. Neither are many Swiss national team walkers, nor many chiropractors in the Mid-Wilshire region. And certainly not many husbands or fathers, wherever they live.

René Haarpaintner, however, fits all of the above descriptions. And in a year, at 61, he will be a father in more ways than one. Surprising? Yes and no.

“I didn’t expect the call to the priesthood,” he said with a wry smile. “But God calls us in different ways and at different times, doesn’t He? Because nothing is impossible with God.

Haarpaintner recalls hearing this “call” for the first time at the age of 18, when he lived near a monastery, and was drawn to “the way of life and the spirit peaceful” of the religious who lived there.

While competing for the Swiss walking team, he met Lauren Feder, a general practitioner and founder of the Center for Natural Family Medicine in Los Angeles. They became friends and then lovers, married in 1991 and raised two sons, who are now adults.

Haarpaintner also graduated from UCLA with a degree in art history and in 2002 became a chiropractor, joining his wife in her practice and becoming active at St. Brendan’s Church. Then in 2014, she was diagnosed with cancer and died in November.

Before that, however, Lauren—aware of her husband’s deep faith and desire to serve God—asked him, “Are you going to become a priest?

“I said, ‘No, I’ll take care of the boys and run the doctor’s office,'” he said. “But after Lauren died, I lost my heart to work in the office.” He sold the firm and took a year off to care for his youngest son, who was attending Loyola High School. “But I also asked myself, ‘What should I do?’ And the priesthood kept calling.

He spoke with his pastor, Msgr. Terrance Fleming, and with Father Steve Davoren, then head of the Office of Vocations.

“I wondered if I was too old for the priesthood. They said, just look into it and see what happens. I entered St John’s, and by the grace of God, everything went very well.

Her internship year at St. Mary’s Church in Palmdale, Haarpaintner said, “was very eye-opening, especially during COVID-19 and the challenges it presented. I was able to help counsel couples whose faith was suffering and help them rediscover Christ and bring true light into their lives. I thought, this is what God wants me to do because ultimately Christ has to be in the midst of the domestic church.

And as a dairy farmer, the image of guiding a herd resonates with this former chiropractor. “I took care of the body; now I care about the soul.

Or they are then go

Here are the new transitional deacons‘ Parish assignments for the following year (their home parishes, unless otherwise specified):