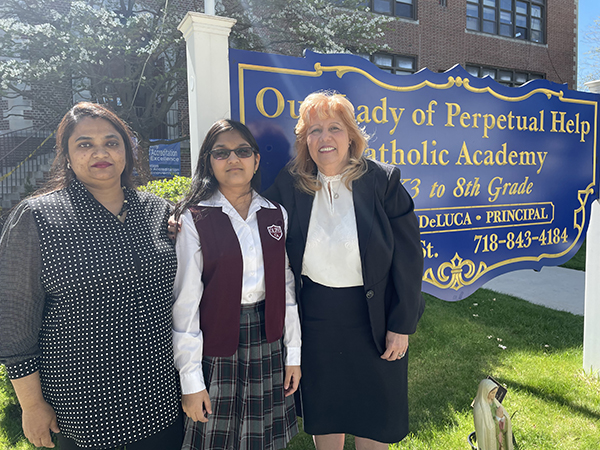 SOUTH OZONE PARK — Maya Singh, an eighth grade student at Our Lady of Perpetual Help Catholic Academy in Queens, said she enjoyed every minute of her time at the school, where she feels right at home and has made many friends with whom she has much in common.

But one thing Maya doesn’t have in common with many of her classmates is religion. Unlike them, Maya is not Catholic. She is Hindu. Even so, she says, she never felt like she belonged.

“I never felt like I was different. They are so nice to everyone. Everyone is treated the same,” said Maya, who has been attending Our Lady of Perpetual Help since pre-kindergarten and preparing to prepare for her graduation in June. She will attend Archbishop Molloy High School in September.

Maya is part of a trend in the Brooklyn Diocese – non-Catholics attending Catholic schools.

About 70% of students in schools and academies in the diocese come from Catholic families, meaning about 30% are non-Catholic, according to the Office of the School Superintendent.

Our Lady of Perpetual Help principal Frances DeLuca said about 20% of the 375 students at her school are non-Catholic. “The other religion that is prevalent in our school is Hinduism,” she explained.

It is not necessary to be a Catholic to attend a Catholic school in the diocese.

“They don’t have to be Catholic as long as they buy what we sell – rigorous academics, love of God and respect for all, and strong discipline,” said Deacon Kevin McCormack, the new superintendent of schools.

And while Catholic schools don’t proselytize, they do require all students to attend religious classes. There is no special exclusion for non-Catholics.

“We’re not advocating for anyone to convert,” DeLuca said. “We really allow ourselves to be who we are. And they are people of faith – Christians who show our love for Jesus Christ.

But if non-Catholic students are enriched by the Catholic school experience, so are children who are raised in the faith, DeLuca said.

A diverse student body gives children a chance to experience other cultures, she added. For example, Our Lady of Perpetual Help celebrates Diwali, the Hindu festival of lights, every year.

“Our Catholic children benefit from having classmates different from them,” she explained. “Jesus taught us to love each other despite our differences. Our children experience this every day in class.

At Xaverian High School in Bay Ridge, where Deacon McCormack served as principal for 15 years, 20 percent of the students are non-Catholic. He estimated that half of these non-Catholics are students of other Christian denominations. The other half, he says, are non-Christians. “We even had a few Jewish children from time to time,” he added.

This 20% figure is on par with national figures. According to the National Catholic Education Association, 20.3% of students attending Catholic schools in the 2021-2022 school year in the United States are non-Catholic.

Non-Catholics choose to enroll their children in Catholic schools for a variety of reasons, primarily the family atmosphere the schools provide, good academics and dissatisfaction with the city’s public school system, educators said. .

Some parents have expressed concern about security at public schools – an issue highlighted by the number of weapons students bring to schools. According to NYPD statistics, more than 4,700 weapons, including 1,100 knives and 16 pistols, have been recovered from public schools since September 2021.

Enrollment in public schools is down nearly 2% since last year, according to the Department of Education. At the same time, enrollment in Catholic schools in the diocese has jumped 2.4% since 2021.

Their parents usually cite two reasons for wanting to send their daughters there.

“Their main reasons are our high academic standards and the idea of ​​having their daughters in a space where they are encouraged to be leaders,” said Spicijaric, who estimated the non-Catholic population at 10%.

Many parents love school transparency like the Our Lady of Perpetual Help display, DeLuca said. “Parents can visit our website and see published test results. They see how my teachers communicate with parents because we put a lot online,” she explained.

“They are looking for a school that is safe and really promotes the development of the whole child,” she added.

DeLuca, who served as principal for 24 years, said religious diversity was nothing new at her school. Some of its current non-Catholic students are the children of former students or have older siblings who went there. For example, Maya is part of a long line of people in her family who attend Our Lady of Perpetual Help.

Sometimes it is word of mouth that attracts non-Catholic parents. Jessica Singh, Maya’s mother, said the parents’ positive experiences at school convinced her.

“My husband’s nephews went there,” she said. “They came to our house with their homework and talked about their school. I was fascinated. And I said, ‘I’m going to give it a chance.’ It is an exceptional school. »

She never regretted it.

“We are not Catholic,” she added. “But we all believe in one God.”