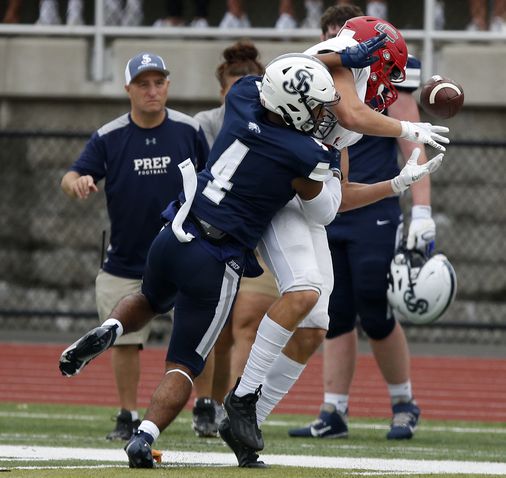 Central Catholic vs St. John’s Prep (Friday, 7 p.m. at Cawley Stadium, Lowell): On September 18, Prep strangled Central for a 49-14 victory, and SJP stopped the Raiders in back-to-back D1 North finals en route to Super Bowl victories in 2018 and 2019, but each encounter starts over at 0-0. . To take: central Catholic.

Franklin vs.Springfield Central (Saturday, 11 a.m. at Shrewsbury): The Panthers have had a special season with senior fullback Mack Gulla leading a balanced offense. However, William Watson and the passing attack of the Golden Eagles could prove unstoppable. To take: Springfield Center.

Catholic Memorial vs Marshfield (Saturday, 4 p.m. at Marciano Stadium, Brockton): It’s been an unforgettable season for the 9-1 Rams, who just beat unbeaten Lincoln-Sudbury but face an almost impossible task against the top WC. To take: Catholic Memorial.

Billerica vs. North Attleborough (Saturday, 4 p.m. at Quincy Veterans Stadium): Tyler DeMattio and Tyler Bannon put together an impressive 1-2 punch that led the Red Rocketeers to a 62-point performance against sixth-seeded Milton. Now they face a stingy defense from Billerica who allows just 10.8 points per game. To take: Attleborough North.

Scituate vs Grafton (Saturday, 1 p.m. at Shrewsbury): With Andrew Bossey and Keegan Sullivan back on the lineup, the seeded Sailors edged previously undefeated Ashland 21-14 to keep their Super Bowl hopes alive. Grafton (10-0) is averaging 38.5 points per game over four wins and is certainly capable of stopping Scituate’s run. To take: Scituer.

Duxbury vs. Foxborough (Saturday, 7 p.m. at Quincy Veterans Stadium): Are the Dragons on a collision course for a rematch with Patriot League rival Scituate at Gillette Stadium? Not if Dylan Gordon and the Foxborough Warriors have anything to say about it. To take: Foxborough.

North Reading vs. Pentucket (Friday, 5:00 p.m. at Manning Field, Lynn): These Cape Ann League rivals meet in the first half of a doubles program at Lynn with their potential Super Bowl opponents watching from the stands. Pentucket is looking to avenge a 20-0 loss to North Reading in Week 3. To take: Reading North.

Abington vs St. Mary’s (Friday, 7 p.m. at Quincy Veterans Stadium): Jim Kelliher is aiming for his 300th career victory in a tough clash against the Spartans, who feature one of the best running tandems in the state with David Brown and Derick Coulanges. To take: Sainte Marie.

Rockland vs. Blackstone Valley Tech (Saturday, 1 p.m. at Walpole): After opening the season with back-to-back losses and losing their last regular season game with Assabet due to COVID protocols, BVT came out gangbusters in the playoffs and managed to beat seeded Stoneham, 28-14, thanks to a fiery defensive effort. They won’t take this Rockland team off guard. To take: Rockland.

Cohasset vs. Mashpee (Friday, 7 p.m. at Carver): In another testament to the strength of the South Shore League, the Clippers and rival Falcons will face off on the pitch of another Tobin League program, Carver. The winner gets Northbridge or the top seed Wahconah in the Super Bowl. To take: Mashpi.

Wahconah vs. Northbridge (Saturday, 1 p.m. at Holyoke): Northbridge coach Ken LaChapelle has over 500 career wins, including three playoff wins against Wachonah since 2001. To take: The North Bridge.

Hoosac Valley vs. Hull (Friday, 6:30 p.m. at Shepherd Hill): There’s not much more statewide than this game. The top-ranked Hurricanes travel to mid-state to face one of six surviving South Shore League teams. Iron sharpens iron and Hull will be ready for battle. To take: Shell.

Randolph v. Oxford (Saturday, 12 p.m. at Lincoln-Sudbury): The Blue Devils recovered just in time for the playoffs and took extensive road trips to win two playoff games against Lee and Ware. Now they’re on a relatively short trip to Sudbury to face an 8-2 Oxford team that has won five in a row. To take: Randolph.