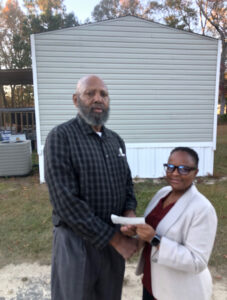 The North Carolina Association of Black County Officials focuses on communities led by elected and appointed African American representatives and tries to create a better economy and environment. Each year, the association awards a scholarship to a student with a cumulative grade point average (GPA) of 3.5 or above.

According to Bladen County Commissioner G. Michael Cogdell, this year’s recipient is Charles Brown, who graduated from East Bladen High School in 2021. Brown is originally from East Arcadia and now attends NC A&T University as a that first year.

While Brown was in school, his mother, Leisha Brown, accepted the reward checks on Brown’s behalf.

In a recent press release, Angela Carter of Metcon said, â€œThis culture of diversity and inclusion is very important as we continue to grow as a company.

Commissioner Cogdell is the first vice president of the North Carolina Association of Black County Officials, and on December 6, 2021, he will assume the seat of president of the non-profit organization. He said the organization is currently working with lawmakers to provide more broadband services and better education.