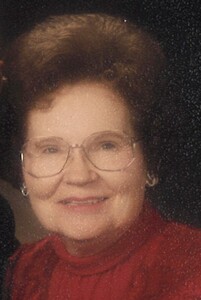 Longtime resident of Enid, OK, Phyllis E. Bushnell, 97, of Joplin, Missouri, died at 2:59 p.m. on Thursday, September 17, 2021 at Spring River Christian Village in Joplin.
Phyllis was born August 18, 1924 in Osborne, KS, and had lived in Enid until she moved to Joplin in 2008. Phyllis was employed as an accountant for Lambert’s clothing store in Enid for 26 years, taking her retired in 1993. She was a member of College Heights Christian Church in Joplin and served on the Department of Cheerleaders. She also volunteered with the US Department of Rehabilitation in Joplin. She was a long-time member of Davis Park Christian Church in Enid. Phyllis has assisted her husband, Bill Bushnell, in Christian ministry in several cities in Oklahoma, including Enid, Ponca City, Deer Creek, Waukomis, Medford, and Pleasant Vale.
Phyllis married Bill Bushnell on October 16, 1943 in Enid. He was predeceased in death on September 3, 2002. She was also predeceased by a sister, Charlene Williams, and a granddaughter, Susan McQueen. Survivors include two sons, Rick Bushnell (Sheryl), Joplin, MO, and Chris Bushnell (Diane), Louisville, KY; one daughter, Cindi Elrick-Real (Freddy), Boise, ID; 11 grandchildren and 20 great grandchildren.
The family will receive friends from 4 p.m. to 5 p.m. Monday at the Mason-Woodard chapel in Joplin, followed by a sharing time at 5 p.m. Funeral services will be at 2 p.m. Tuesday at Enid’s Memorial Park Cemetery.
Commemorative contributions are requested from the Ministry of Circuit Riders in charge of the morgue. The arrangements have been entrusted to the Mason-Woodard Mortuary in Joplin, MO.

Dunnellon, the Catholic notch of the Trinity wins

Thousands of hungry people receive food, hope thanks to Stand in Faith Ministries |…