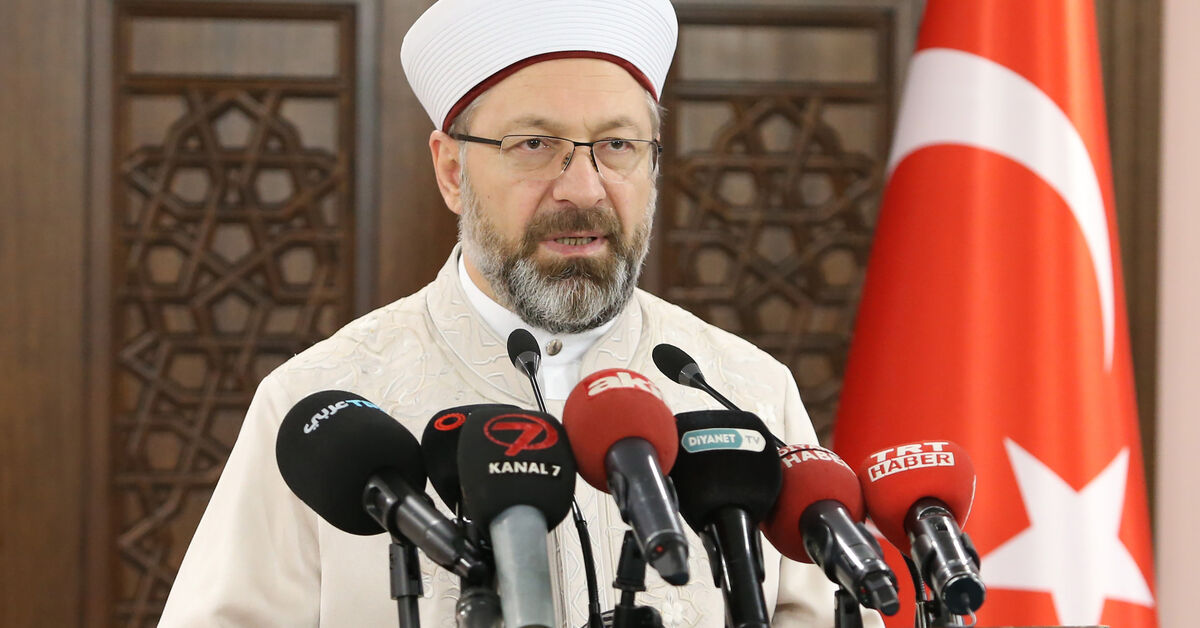 Powerful Turkish cleric called to calm down or resign

For some pro-secular Turks, the prayer pronounced by Ali Erbas, vocal head of the Directorate of Religious Affairs, at the start of the 2021-22 judicial year sounded like a death prayer for Turkey’s independent justice and secularism.

“Opening the judicial system in this particular way is unacceptable under the rule of law,” the Istanbul Bar said in a statement as images of President Recep Tayyip Erdogan and President of the Court of Cassation Mehmet Akarca in prayer dominated the news and social media. . Erdogan and Akarca, who wore the judicial gown, were seen with their hands raised alongside Erbas during a ceremony marking the opening of a new service building for the tribunal and the start of the judicial year on the 1st September.

“The principle of secularism[…]does not allow the judiciary to operate with religious references. … A secular state that accepts the rule of law must guarantee justice to its citizens by keeping an equal distance from each denomination. … Any movement that denies this would give the appearance of a religious state, ”the statement from the Istanbul Bar said.

Dogan Erkan, lawyer and member of the People’s Salvation Party, a small communist party, filed a complaint with the Ankara prosecutor’s office against Erbas, Erdogan and Akarca for violation of the principle of secularism of the Turkish Constitution and abuse of power. Muharrem Ince, leader of the Fatherland Party, criticized Erbas, the government and Kemal Kilicdaroglu, leader of the opposition, who was present at the inauguration ceremony. “At the opening of the judicial year, they Cut the rope on the rule of law and secularism, while the opposition holds the other side of the ribbon. You will all go, ”he tweeted.

The white-cloaked figure of Erbas standing alongside Erdogan at openings or inauguration ceremonies is a familiar sight in Turkey. A day before the opening of the Court of Cassation building, Erbas prayed alongside the President, the Minister of Defense and the force commanders during the dedication ceremony of a huge military complex in Ankara. On the day of the judicial ceremony, he accompanied the president to the inauguration of the Academy of Gendarmerie and Coastal Defense, where he prayed for the officers who would be trained there. “God, may you make our troops victorious on land, sea and in the air; protect them in their fight against terrorism, ”he urged.

The senior Turkish religious official also accompanied Erdogan on his visit to the Turkish Republic of Northern Cyprus from July 19 to 21 and opened the Bilal Pasha Mesjd and Foundation in Varosha (or Maras, as it is called in Turkish), a Controversial ghost town which was partly opened by Turkish Cypriots last year.

Supporters of Erbas said the September 1 prayer was no different from usual practice. The visible superior clergyman was only extending a prayer to the new building and not to the judiciary. Fahrettin Altun, Erdogan’s communications czar, responded to criticism by posting a photo of Kemal Atatürk opening Turkey’s first parliament with a cleric by his side – implying that presidents were accompanied by religious figures during openings in the first years of the republic.

How it started. How are you … pic.twitter.com/VnnIU6zOJs

Erbas was fiery in his own defense. “As leaders, we must not leave any void,” he said at a meeting of graduates of Imam Hatip religious schools. Criticizing efforts to “weaken religion” by pushing it out of public space, he said, “How can we have Islam without justice? [There are some who want] the faith of simply remaining between the believer and God and not extending to their home, their work, politics, justice or the judiciary. … You see how they make stories.

Days later, Erbas further fueled the flames with remarks on social media checks. In an online meeting on September 5, he said Turkey urgently needed “a new legal framework for the use of social media” and echoed Erdogan’s words on “establishing of a strong mechanism “.

The senior religious official had suggested earlier that Islamic jurisprudence (fiqh) could be applicable to regulate social media in cases where legal regulations are insufficient, the daily Cumhuriyet reported, digging up its preface from a new book, “Social Media Ethics ”, published by the management. earlier this year.

This second remark – along with his words that religion should be in the public space – sparked a new wave of protests from the opposition. Republican People’s Party (CHP) deputies called on Erbas to refrain from sticking his nose into politics or to resign and become an MP. “If he wants to be in politics, he should just take off his cape and run for office,” said Faik Oztrak, spokesman for the main opposition. “We would expect the director of religious affairs to stay within the confines of his office,” said Engin Altay, head of the CHP group: “Your guide should be the Quran, not Erdogan.”

But Erbas, who has enjoyed a meteoric rise since delivering the first sermon in Hagia Sophia with a sword in his hand on July 24 last year, is unlikely to be intimidated. Vocal and outspoken on everything from smoking to singles, he enjoys the support of the president and the ruling Justice and Development Party heavyweights whenever he is faced with controversy.

Erdogan came to Erbas’ defense when the latter said Islam condemned adultery and homosexuality because they “bring disease and corrupt generations” at the height of the COVID-19 pandemic in April 2020. As LGBTI groups in Turkey and abroad accused the cleric of spitting hatred for the vulnerable gay community, Erdogan said an attack on Erbas was “an attack on the state”.

When students protested against Erdogan’s appointment of Melih Bulu as head of the prestigious Bogazici University with a poster depicting Islam’s holiest site alongside LGBTI flags, Erbas also jumped into the debate. “I strongly condemn this act… and we, as the Directorate of Religious Affairs, will follow the matter and seek justice against those who delivered this. disrespectful actHe tweeted on January 29. Two students were arrested on the same day.

The visibility of Erbas is subject to different interpretations. “Is Erbas aiming for the presidency? ”, Asked Deniz Zeyrek, an Ankara insider, in his column in the fiercely anti-AKP daily Sozcu. “He sees himself as the right person to succeed Erdogan as president. This is why he continues to attack Atatürk or secularism. No one should be surprised if he takes off his cape, puts on a costume and goes into politics.

Others argue that Erbas plays this role because it is what is required of the Directorate of Religious Affairs, known as Diyanet. “Diyanet is an important instrument in the government’s war against secularism,” said Burcu Karakas, journalist and author of “We are Everything: Diyanet at Work”.

“Following the legal changes made to Diyanet’s statute in 2010, the agency has become increasingly active in all areas of daily life, especially in family affairs, women and the education of children and young people. Karakas told Al-Monitor.

Armed with a budget of some 13 billion Turkish liras ($ 1.6 billion), Diyanet ranks 13th among 40 public entities funded from the central government budget. Its steadily growing staff reached 128,000 people across Turkey in 2020. It operates around 90,000 mosques and around 20,000 Koranic courses across Turkey. She owns her own TV channel and has signed an agreement with Turkish national broadcaster TRT to set up a children’s TV channel.