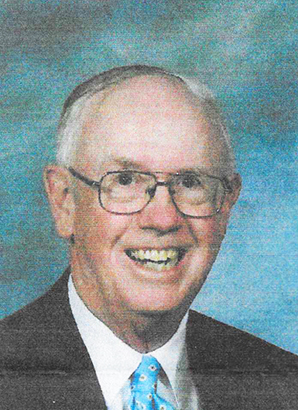 Reverend Herschel C. Dugan, 90, passed away on August 9, 2021 in Olathe, Kan. He was born April 13, 1931 to Charles and Harriet (Van Buren) Dugan in Mankato, Minn. After graduating from high school in Mankato, he attended Phillips University in Enid, Okla., Before seminary at Drake University in Des Moines. He then obtained a doctorate in ministry from Phillips Theological Seminary.
On July 28, 1960, he married Shirley Tietsort in Omaha. He served churches in Oklahoma, Omaha, Aurora (1963-68), Olathe and the Des Moines area before retiring in 1996. His Christian faith and passion for justice led him to come to Hattiesburg , Mississippi, in 1964 to register black voters. As a minister of the Disciples of Christ denomination, he was known to build relationships and be there for people in times of need.
He was a member of Saint Andrew’s Christian Church in Olathe where his daughter, Denise, is the Associate Pastor of Faith Training; a Rotarian and Mason; and chaplain of the Olathe Fire Department for a decade. He and Shirley enjoyed traveling across the United States and Canada, as well as trips abroad; Herschel led several tour groups to Israel. His interests included cycling, photography, cars and later in life he loved to paint.
He was predeceased by his parents and a sister. Herschel is survived by his wife, Shirley; their daughter, Denise Dugan (Steve Siebers); his son, Mark Dugan, and his sons, Ryan and Connor. Private burial took place at the Olathe Memorial Cemetery, with a memorial service to be held at a later date. Condolences can be sent to: Shirley Dugan at 15329 S. Lone Elm Rd, # 328 at Olathe, 66061-6207, and memorials are suggested at the Saint Andrew Christian Church Legacy Fund, https://sacchome.org/give/.