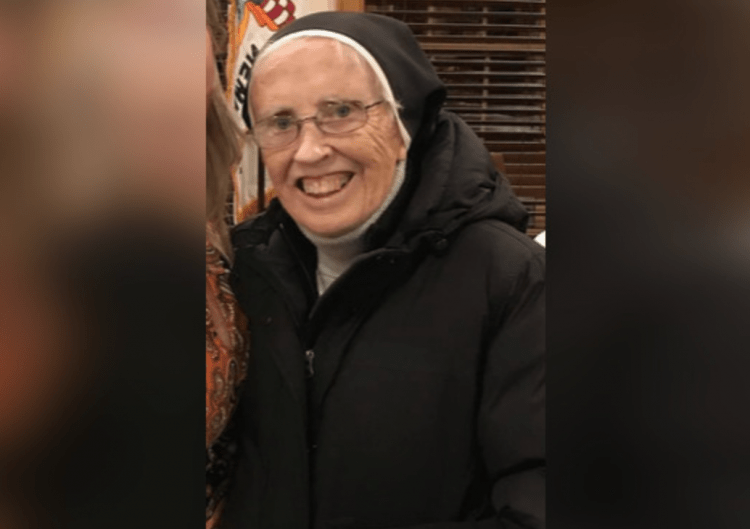 Josephine Saint-Leger is born in O’Callaghan’s Mills, County Clare, Ireland To Patrick and Mary Anne (Kelleher) St. LÃ©ger to December 3, 1931. Life began for little Josie in the beautiful countryside. She was the youngest of five siblings, all of whom were educated at the local national school where faith and life were closely linked. While the distance from home to school was nearly two miles, daily walking on country roads or through fields was a time of growth. Nature in different seasons has given a lot of learning opportunities. Friendships that last a lifetime were forged in those early years.

The secondary school was in the big city of Dublin, a culture shock in many ways, but it proved without a doubt the quality of education in the national schools of Ireland. These have been busy and good years and have prepared Josephine for the separation of home and family, and where she has learned the value of maintaining friendships. It was her first real contact with the sisters and she answered the call that would help her to live out her gift of faith as a Cluniac missionary. When Josephine’s decision to enter the convent was known, she amazed those who knew her at hurling matches and ceili dances. The fact that she celebrated 67 years of religious profession in January 2021 is the answer to these questions!

JosÃ©phine entered the novitiate of Cluny in Ferbane in Ireland in 1941, was received as a novice in 1942 and made profession of sister of Cluny in January 1954. When Sister JosÃ©phine entered Cluny, she fully expected to be sent on a mission to Africa, the South Pacific, or the Caribbean, for during her high school years she had sung “Go Ye Afar” with the Mount Sackville Choir in ceremonies for newly professed departing on distant missions. She may have been surprised that she was instead sent on a mission to the United States, but everywhere she went she began to preach the Good News of the omnipresent love of God, in the missionary spirit of Blessed Anne Marie Javouhey. Belonging to the global Cluny family, sharing the mission and relationships with the sisters was at the heart of his life. Through her connections in the community, in her various ministries, in her love for children, and her volunteer trips to Kentucky and West Virginia, she had a gentle way of letting others know that they were loved and valued. Sister Josephine dedicated her gifts of leadership not only to her various ministries but also to her community of Cluny, serving as community leader at St. Joseph’s Convent on Brenton Road and later, as the new community leader, meeting with three other sisters in the foundation of Javouhey House, the community of the Sisters of Cluny on Avenue Carroll in 2003. From 1995 to 2003, Sister was also provincial councilor and administrator of the Cluny school. To be able to celebrate his Golden Jubilee, at Saint-Augustin Church on January 4, 2004 with Sisters Anne Grogan and Pius Moore, the two members of his profession group, and surrounded by the Sisters of Cluny, members of the family, friends and parishioners was a highlight for her.

Sister Josephine graduated in English and Philosophy and Education from the University of San Diego, and studied at the Weston Theological Institute, Cambridge, Boston.

Sister Josephine arrived in the United States in 1954. After a brief stay at the Stella Maris home on Washington Street, she was sent on a mission to Torrance, California. In 1958, she joined with three other sisters in founding Cluny’s first mission at St. Joseph Parish in Hamilton, Ontario. She was then assigned to Cluny School in Newport for the 1963-64 school year before returning to California where she spent many years teaching at Sts. Pierre and Paul School in Wilmington.

In 1979, Sister JosÃ©phine arrived in Newport as principal of the Cluny school, a position she held for twelve years. As a principal, she encouraged teachers to be creative and develop their own style rather than fitting into a mold. She mentored and supported, directed and imposed respect by her example. Of the most troublesome student, she would say, â€œUnderneath it all, he (or she) is a good kid. When correcting a disbeliever, she could add just the right note of humor and love. Like a mischievous student, a grown man said, â€œWe always knew you loved us. “

During her years at the Cluny School, she also contributed to the parish life of St. Augustine Church in Newport as a Religious Education Teacher, Confirmation Coordinator, and Eucharistic Minister.

Proud of her American citizenship, Sister Josephine’s love for Ireland and its culture has never wavered. The sister’s participation in the Irish Heritage Society was an integral part of her life. The Cluny School helped organize the Irish Month with their choir, marching in the St. Patrick’s Day Parade and singing for Masses in honor of St. Patrick at St. Joseph’s Church to begin the parade and at the Saint-Augustin church to feast him himself. Sister Josephine served on the board of directors of the Irish Heritage Society for many years and was chaplain of the Ancient Order of Ladies of the Hibernians for seven years. She loved the ceili dance on every occasion. Who better to be the Grand Marshal of the St. Patrick’s Day Parade in the year 2000?

After leaving the Cluny school, Sister JosÃ©phine began her ministry as a pastoral assistant in the parish of Saint-Augustin. Sister JosÃ©phine encouraged many initiatives and was able to highlight the gifts of parishioners to serve in various capacities in the life of the parish. The sister trained children as altar servers, and new confirmed and adults in liturgical ministries. It prepares couples for marriage and then for the baptism of their children. She accompanied the sick and homebound through their last illnesses, comforted grieving families and helped them plan funerals. During these years, she was also the administrator of the parish. All this she did without pretension with love and devotion until her retirement in November 2019. After her retirement, she continued to serve by organizing funeral services on demand, supporting the bereaved, staying alive. contact with parishioners and including them in his daily prayer ministry.

Over the years, even in the midst of busy days of ministry and community responsibility, Sister Josephine has remained close to her family, celebrating joys and supporting them in hardship and loss.

Deep down, Sister Josephine has always been the simple daughter of O’Callaghan’s Mills who could marvel at a daisy on her way and find joy in little things. Although she is remembered for her many accomplishments, she was above all a woman faithful to herself, to her God, to her family, to her sisters in community and to the many friendships made wherever she lived. There was still a sparkle in his eyes and a ready smile on his face. And when the music started you would hear a toe click. We will always be grateful for the gift of Sister JosÃ©phine among us. Ar dheis De go raibh in hanam dÃ­lis.

She was predeceased by her parents, Mary Anne (Kelleher) and Patrick St. Leger, her brothers James and Michael St. Leger, her sister Mary Browne and her niece Martina Browne.

Visiting hours will be at St. Augustine Church on Tuesday August 24 from 4:00 p.m. to 7:00 p.m. with a prayer service at 6:30 p.m. On Wednesday, August 25, at 11:00 am, a Christian funeral mass will be held at St. Augustine Church with Pastor Emeritus Fr. John McNulty officiating. Interment will follow at St. Columba Cemetery, Brown’s Lane, Middletown. The reception will follow at AOH Hall, 2 Wellington Avenue, Newport.

Memorial donations can be made to Sisters of Saint Joseph of Cluny, PO Box 66, Newport, RI 02840 Where www.clunyusandcanada.org. The Sisters of Cluny and the Saint-LÃ©ger family wish to express their gratitude to all those who supported Sister JosÃ©phine and all of us, especially during her last illness.

Do you like Newport Buzz? We depend on the generosity of readers like you who support us, to help us in our mission of keeping you informed and entertaining you with local and independent news and content. We really appreciate your trust and support!