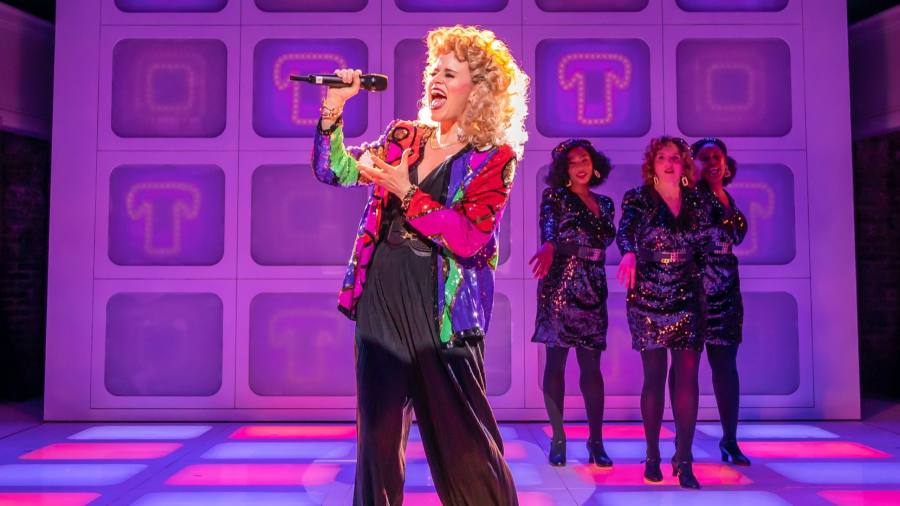 The Lord moves in mysterious ways – and so it happens that we have this divinely wacky glitter bomb from a James Graham and Elton John musical. Along with lyricist Jake Shears of Scissor Sisters, the playwright and songwriter gauges the phenomenal rise and fall of televangelist Tammy Faye Bakker. “If I hadn’t lived it, I wouldn’t believe it,” she says at the start of the action – a comment that, by the end, feels like an understatement.

But while Rupert Goold’s production thunders with all the ungovernable energy of hairspray-rich roller-disco, at its heart lies a serious point about an unholy mix of populism, politics and preaching that remains with us today.

At the start are Tammy Faye (Katie Brayben) and Jim Bakker (Andrew Rannells), earnest small-town evangelists who get the message across through the uncertain means of puppet theater. Enter satellite TV and electric church. Miraculously, they procure a religious channel, with Tammy Faye acting as her husband’s sidekick. But it is she who captures the essence of the medium, blending Christian ministry with straightforward advice. His instinctive understanding that, in a lonely world, television feeds on the illusion of intimacy, reaching out across the screen shoots ratings skyward and fills coffers with cash.

But all over Eden there are snakes in the grass and forbidden fruits. The couple’s “prosperity gospel”, their extravagant lifestyle and their fraudulently amassed fortune cannot survive contact with cold reality – or the FBI. (Plus, there’s the Bakker sexual misconduct scandal.) Meanwhile, Tammy Faye’s belief that Christian love extends to everyone — she did a famous interview with a gay pastor who had AIDS – both enrages the Christian right and gives them ammunition.

Graham, our chief political playwright, spies in this garish saga on the roots of contemporary culture wars, with conservatives and fundamentalists raging over “woke” values ​​and infiltrating the body politic with chilling effect. It’s the Graham of Ink and The best of enemies, offering a thoughtful analysis of the interplay between politics and popular culture. But he’s also the Graham of television series sherwood, favoring forgiveness over revenge. Key to the drama is Tammy Faye’s observation that in the Bible love is mentioned 489 times, hate 89 times.

It’s all presented in a larger-than-life narrative style, which fills this unique church with a mix of frenzied dialogue, religious frenzy and Lynne Page’s wild dance routines. John and Spears drive events forward with a combination of silly rock pastiche, glam-rock, and authentic, catchy ballads. Best of these is “Empty Hands” before the interval, a soul-baring torch song that Brayben delivers with a passion that soars the rafters. And she looks great, bringing both warmth and sparkling intelligence to Tammy Faye, nicely contrasted by Rannells’ Bakker, uneasy in her own skin. Slithering around them is Zubin Varla as the reptilian Jerry Falwell.

It all gets a little bogged down in act two and few songs follow you home. What’s missing in the frenzy is character depth and closer examination that would make this truly illuminating. But it’s a spectacle riot, at the heart of a timely and provocative message about love and tolerance.

Student-athletes and the power of scholarships – The American River Current