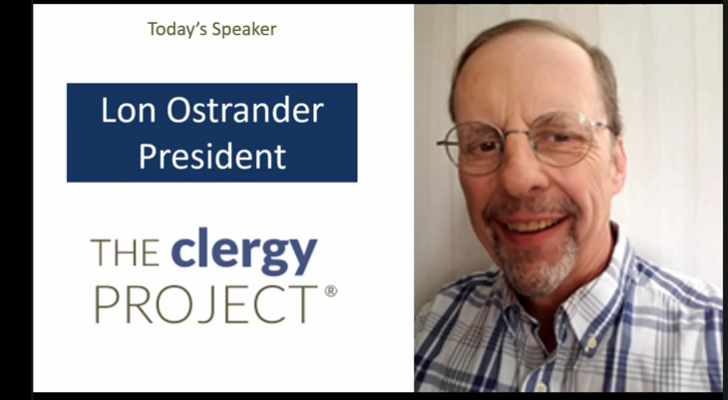 “The Clergy Project” was the last presentation of the Humanist Society of Santa Barbara.

It is a challenge for anyone to leave their religion. But it’s an even bigger challenge if you’re a member of the clergy.

Lon Ostrander held this position before The Clergy Project existed. As a clergyman, he could not share his new views with his congregation. It wasn’t appropriate to be outspoken and celebrate his “found freedom.”

The Clergy Project (TCP) shows clergy in this situation that they are not alone. Not being alone was a big theme of his speech.

The Freedom From Religion Foundation (FFRF) was co-founded by Anne Nicol Gaylor and her daughter, Annie Laurie Gaylor, in 1976. Dan Barker served as a minister in several denominations and later came out publicly as an atheist in numerous letters. He doesn’t recommend that!

Here is one of my photos of Dan Barker when he addressed the Humanist Society in 2008:

In 2006, Dan Barker and Richard Dawkins met at a humanist conference in Iceland. Together with Daniel Dennett and Linda LaScola, they came up with the idea for what became The Clergy Project. It finally happened for real in March 2011. In November 2011, Ostrander became the 100th person to join TCP.

Here is Richard Dawkins at UCSB in 2012:

And here I am with Daniel Dennett and Professor Jonathan Schooler from UCSB in 2013:

Ostrander was glad to have others in his position to talk to. In 2012, TCP became a 501C3 nonprofit under Dan Barker. In 2018, Ostrander took over as president and has since been elected twice.

He was brought up in a Christian family in the countryside. Their family was invited to a Pentecostal church. They stuck with it until the family moved to the town of Elmira Heights, NY in 1958, when he was eight years old.

There they were invited to join the General Association of Regular Baptist Churches (GARB) church which had a brand new building. He noted that sermons were more boring than Pentecostal sermons! He married and divorced there, then married his current wife of 44 years.

In 1994, he was in a religious camp during a business meeting that did not interest him. He felt a warming in his body like what the London clergyman John Wesley felt in 1738. Ostrander felt it was a sign to join the ministry.

He attended Indiana Wesleyan University and “dived in headfirst.” He was middle-aged with a family and he feels he probably neglected them. He was so successful that he was allowed to serve as a minister. He sold their house and moved to Georgia.

He ended up in Elmira. He was supposed to be ordained after seven years, but they didn’t. I made him jump through hoops three more years. I wouldn’t say why. Ostrander at this point told them “I have always loved and respected you. I still love you.” He had lost all respect for the church.

He gave up being a minister, but he was still a believer. He looked at other denominations and found out that none of them had the answer. It was six years after leaving the ministry that he made a list of the things he believes in. Starting with “God exists”. He realized that the first item on the list was not true for him. He felt lucky not to be a minister anymore, so he didn’t have to deal with his loss of belief while being a minister.

He took the label “atheist” for himself. More prayer. Sleep on Sunday morning. His family was disappointed. His wife is still a believer. Some things they should avoid talking about!

It found TCP with no intention to direct. He was just glad he wasn’t alone.

TCP has an online forum and a hidden Facebook group. Counseling through the Lay Therapy Project. Career transition support. But the main purpose of TCP is not to feel alone.

Maureen is the head of their selection committee and was in the audience for this discussion. Candidates are paired with reviewers from a similar background. He went on to give several case examples.

Example 1:
Southern Baptist. At 14, he was already engaged in full-time ministry. He was now 33 and had a podcast for people leaving Christian fundamentalism. He doesn’t know what to do now. Not prepared for real life. Unemployed. Has a part-time son. Credit card debt.

Example 2:
Started ministry with Church of Christ. He went to different faiths. He worked as an IT manager, but he “felt a call to ministry.”

Ostrander noted, “There are awkward words!”

He sold everything and took his family to another state. He was preaching on street corners. He was about to serve a mission in South America. But then he had doubts. In 2012, he left the ministry. He is now divorced with four children and a huge debt. Feels lost, alone, depressed.

Example 3:
Muslim. His father was an imam in the village. At 8, he could recite the Koran. At 16, he was an imam. Hoping for support now that he’s been ‘banned’.

Example 4:
Painful and lonely. It’s worse than realizing your life has been wasted on believing the wrong things.

Ostrander said these stories are typical of their contestants.

TCP now has 1,170 participants. Some clergy are a year or two away from retirement and they will sometimes hold on and collect their pension. But some have been retired for 10-20 years and still want to join TCP!

It’s hard to get good stats on TCP people because they don’t hear much from half of them. About 14% of TCPs are women, which is higher than women’s participation in religious leadership in general. Women understand faster!

About 96% are Christians since TCP is based in North America. About 30 denominations. 2% former rabbis. TCP also has former Buddhists, Hindus, Muslims, Native American tribal believers, Raëlians, Wiccans and Zoroastrians. Probably others.

They have participants in 49 states (not North Dakota) and Puerto Rico. Seven Canadian provinces and more than 50 countries.

As far as he knows, no one has ever passed the screening for the TCP that came in to cause trouble. Some people hesitate and don’t know whether they believe or not. TCP will direct them to Recovering From Religion. TCP is for people who know they are atheists.

Participants may use pseudonyms and avatars if they wish. But most use real names and photos.

It can be difficult and dangerous to disclose new opinions to employers, subscribers, family and friends. He recommends taking it slow and making a plan. There may be failures, but he hasn’t heard many.

Priests who were single often move house, marry and have children. It is more difficult for older people to adapt to a new way of life. It is also more difficult for more fundamentalist denominations. They have a greater depth of indoctrination and control. Leaving is traumatic.

How can the CSSS help you? Help spread the word that TCP exists!

His TCP vision is that TCP would be so widely known that it is common knowledge everywhere. Including every madrasa, seminary and church council.

One participant said he felt more love in TCP than in the church he left!

TCP is entirely voluntary. You can donate on their website. But spreading the word is the most valuable contribution.

At this point, audience members told their stories and asked questions. Maureen Hart, a former nun, told her story of leaving the convent and marrying a Catholic atheist. She met Dan Barker at an FFRF conference which led her to join TCP. She enjoyed connecting with other former nuns and reflecting on what they believed and what they didn’t believe now.

Jonathan Young asked if there were any backsliders or if people were going to new nonsense or eastern teachings. Ostrander said maybe 0.1%.

Maureen said some go to Unity Society to have a community.

Bonnie was forced to go to Sunday school as a child and she wondered how many people come into the ministry without really believing in it. Ostrander thinks it’s rare. Maybe they’re hoping someone smarter will explain to them during their training! But the teachers probably have even more doubts!

Wayne asked what secular job the TCP people did. Social work, psychology, computer scientists, education. Some go back to what they really wanted to do before entering the ministry.

I asked Ostrander what his daily job was. He represents clients wishing to purchase public transport vehicles. He likes that. In the past, he has been posted overseas and in other states. But now he comes home on weekends.

I asked if he could say more about his “warm feeling” experience. He said maybe it was temporary madness! He said that never happened again.

Maureen told the story of Dave Warnock. His wife was a member of a strict congregation. Girls convinced not to see it. He had to divorce.

For more information on upcoming events with the Humanist Society of Santa Barbara or to become a member, go to https://www.sbhumanists.org/

Fordham University’s new president will not be a priest