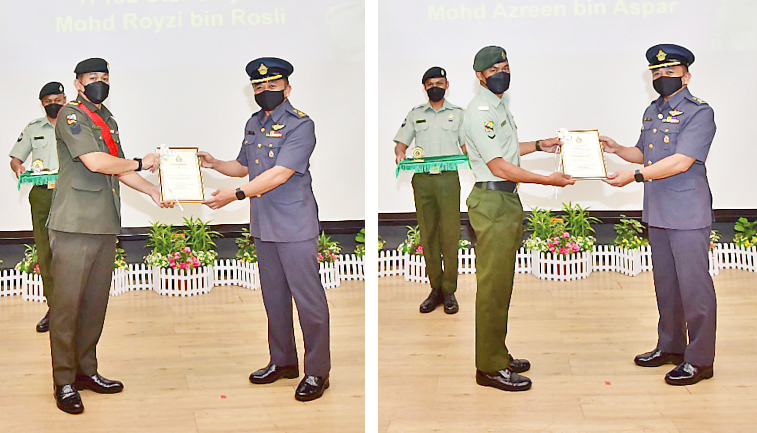 The event began with the recitation of Surah Al-Fatihah and was followed by the guest of honor’s speech.

The Acting Commander reflected on the journey and achievements of DA RBAF over the past 11 years. He noted that DA RBAF has organized trainings and courses to address the challenges during the COVID-19 pandemic by adopting digital technology reflecting the adaptive and resilient capacity of the academy to adapt to the new normality.

He expressed hope that DA RBAF will continue to work hard to realize the academy’s vision and mission to become a world-class professional military academic institution and achieve its 2035 strategic plan.

He also underlined the importance of training and education to build capable, well-prepared and effective armed forces, as outlined in the 2021 Defense White Paper.

In addition, he encouraged all DA RBAF staff to remain engaged in developing new coping strategies to current and future circumstances.

He expressed gratitude to the DA RBAF staff who have served and are now serving in support of the government’s national approach to contain the COVID-19 outbreak and commended them for their courage, dedication and selflessness. .

The event also saw the presentation of awards to personnel who have demonstrated excellent performance in the performance of their duties and made an outstanding contribution to the organization in 2021. For the Senior NCO category, the award went to Staff Sergeant Mohammad Royzi bin Rosli, while the Junior NCO category award went to Lance Corporal Mohammad Azreen bin Aspar.

The event continued with video presentations that showcased DA RBAF’s past activities and achievements. Five roads in the DA RBAF camp have also been renamed.

The ceremony ended with the recitation of Doa Kesyukuran by the academy’s religion teacher, Abdul Nasir bin Hassan.

Local man on a mission to help the homeless