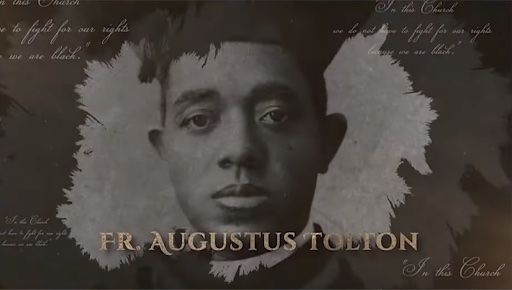 “Father Augustus Tolton – ‘Gus’ as he was called in his youth – he grew up in Missouri and he was a slave,” O’Neill explained. “But his mother, Martha Jane, took him and his two siblings and she crossed the Mississippi River amidst fire from Confederate soldiers… [Arriving] on the other side, they landed in Quincy, Illinois, and that’s where he grew up.

O’Neill explained how, while in Illinois, Tolton attended a Catholic school, where he may have begun to take great interest in the idea of ​​becoming a priest, eventually coming under the tutelage of two German priests from the region.

However, his path to the priesthood would not be easy, as he was not considered a candidate for seminaries in the United States due to his race.

“[The priests] tried to get him into every seminary in the United States and he was rejected at every level,” O’Neill described. “No one in America was ready for the first African-American priest… [Eventually]they sent him to the Sacred Congregation for the Propagation of the Faith in Rome… where he studied and was a very popular seminarian… [going on to] be ordained in 1886.

After being ordained and graduating from seminary, Tolton was more than ready to take on the missionary work that was to be given to him – preparing to go to Africa studying languages ​​and cultures. However, a last minute “bait-and-switch” – as O’Neill described it – led Tolton to perhaps one of the toughest assignments he could have faced.

“He ended up being sent back to Quincy, Illinois, where he had… grown up, where he had been bullied, where he hadn’t been accepted… So he was brought back to the parish maybe the most difficult of all, the territory of the mission. here in the United States.