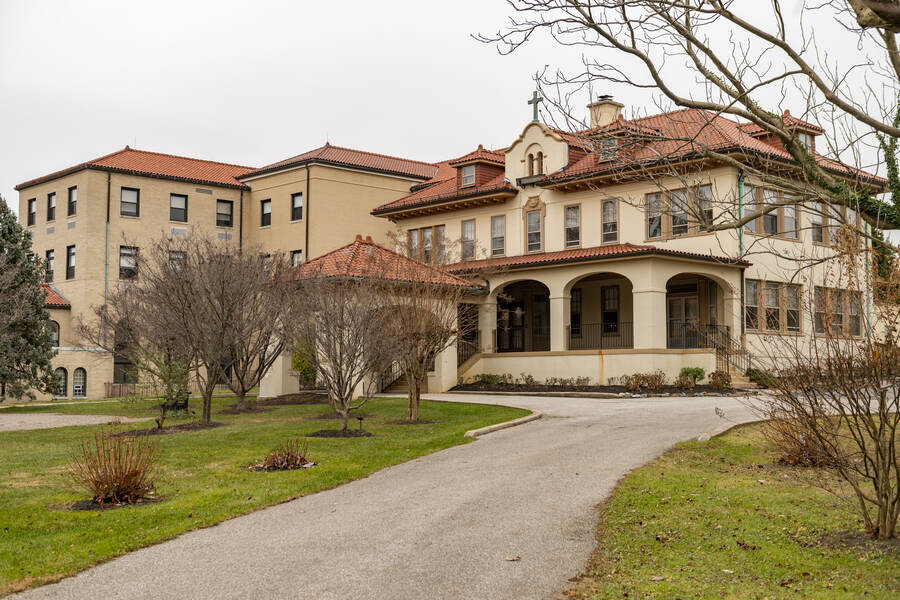 For most of her 50 years as a school sister of Notre Dame, Sister Charmaine Krohe worked in building the church and the local community.

In addition to founding the St. Ambrose Outreach Center, she worked in the Northwestern Baltimore community to feed people, educate children and find jobs.

Now as Provincial Chief of the Atlantic-Midwest Province, she faces the prospect of a shrinking and aging religious population, few new vocations, and the necessary task of shutting down SSND facilities.

SSNDs have seen growth in Africa, Hungary and Poland. In fact, only 1,000 of the 2,000 School Sisters around the world minister in the United States. Of the 381 sisters in the Atlantic-Midwest province, 323 are over 70 years old.

However, some changes are necessary for the sisters to continue their mission.

During a property management study carried out from 2012 to 2016, the provincial council decided to close the Maria health care center in Villa Assumpta on North Charles Street. The sisters were transferred to Stella Maris in Timonium in June. The council is still considering options for the more than 40 remaining sisters of Villa Assumpta. The facility is for sale and will close once the remaining sisters find a new home.

Two other convents, one in Canada and the other in Connecticut, also closed. The sale of Notre-Dame Convent in Ontario will be completed by the end of December. An international school will occupy the first two floors while the sisters will move to rented premises on the top two floors. The school is in line with the SSND mission and it is hoped that the resident sisters will have some kind of ministry with the students, according to Sister Charmaine.

In Wilton, Connecticut, Villa Notre Dame was closed and its 58 residents moved to a retirement community in Bridgeport. Residents of the Lourdes Health Center moved in 2019 to Salle Ozanam, a geriatric care facility sponsored by the Carmelites. In both cases, the sisters continue to live in community.

Selling the properties is difficult.

â€œIt is such a loss,â€ Sister Charmaine said. â€œThis is their home. These buildings have always been their home.

“None of us have pledged our lives to a building,” she noted. On the contrary, the mission of the sisters – “to proclaim the good news, orienting our whole life towards this unity for which Jesus Christ was sent” – accompanies them wherever they go. â€œIt never leaves us, our love for God, our love for our sisters, our love for our congregation. “

During the pandemic, the order also decided to close Institut Notre-Dame de Baltimore in 2020.

â€œIND has been a very hard loss for this whole community,â€ said Sister Charmaine. It was one of the first places their founder, Blessed Theresa Gerhardinger, visited when she came to the United States. Many sisters, even many Baltimorean women, were educated there.

â€œBut it was a necessary thing to do,â€ she added. The number of registrations was down and renovations must have been costly.

â€œWe are doing this for the good of the mission,â€ said Sister Charmaine.

As the property is prepared for sale, the order remains committed to IND alumni and the East Baltimore community.

She said the province is committed to finding a use for the building in line with its education mission to transform the world. Caroline Center, a vocational training center for women, plans to stay on the IND campus.

â€œIt’s a big challenge for a developer,â€ said Sister Charmaine.

Our Lady of the University of Maryland in Baltimore has agreed to host IND alumni. Their new Heritage Hall was inaugurated on November 14 during the IND Alumnae Association meeting weekend. Additionally, on December 1, Gibbons Hall was renamed Caroline Hall in honor of Sister Caroline Friess, who, along with Mother Theresa, brought order to the United States.

â€œThis is a gift the university gave to IND and SSND,â€ Sister Charmaine said.

Sister Caroline, who remained in the United States after Mother Theresa returned to Europe, purchased the land to found the College of Notre-Dame, according to Caelie Haines, communications director of the Sisters of the School of Notre-Dame.

Sister Charmaine is entering her 10th year of provincial leadership. Elected councilor in 2012, her sisters chose her to lead the Atlantic-Midwest province in 2016. The pandemic forced the congregation to extend two-year terms for her and her council, then led the General Council to Rome to appoint the council. now takes office.

Bishop Bruce Lewandowski, C.Ss.R., Auxiliary of Baltimore, will preside over the installation of Sister Charmaine and the Councilors Sisters Mary Roy Weiss, Mary Fitzgerald, Nancy Gilchriest, Paula Dukehart and Margaret Malone at Villa Assumpta on December 8, the Solemnity of the Immaculate Conception, a feast day SSND. Only a few sisters were to attend, but it was to be broadcast live.

While in normal times, the leaders of the province travel from convent to convent, during the pandemic, the Zoom sessions have kept everyone in touch.

â€œIt was the only way for us to communicate with our sisters since we couldn’t visit them,â€ said Sister Charmaine.

The isolation required in the larger convents, such as Villa Assumpta, was difficult, but the sisters adapted and learned the ways of the Internet.

â€œA big part of us is really being community, being together,â€ Sister Charmaine said.