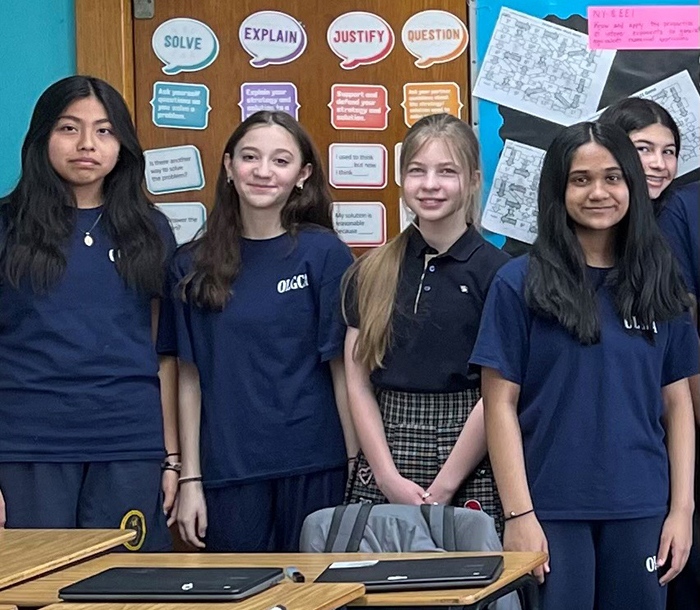 Ukrainian student moves to Our Lady of Grace Academy

GRAVESEND – On the morning of February 24, Russia launched missiles and airstrikes on the Ukrainian capital, Kyiv, forcing a mass evacuation that included Taisiya (“Taya”) Kostochka and her family.

Taya and her mother, Svitlana Kostochka, now live with relatives in Brooklyn.

Before leaving the country, they returned to Kyiv to collect some items for their trip. But then they saw the destruction inflicted on their city.

They passed Taya’s school, where almost all the windows were gone – shocking for the 13-year-old 7th grader. A quick visit inside revealed even more damage to classrooms and offices.

“When Taya saw it, she got so upset,” her mother told The Tablet through an interpreter.

Taya was emotional again on May 11 as she arrived at her new school – Our Lady of Grace Catholic Academy in Gravesend.

“I love my new school,” she said through an interpreter. “Everyone is very friendly and kind. I am very happy.”

Mother and daughter have settled in Brighton Beach, near Gravesend. An acquaintance recommended Our Lady of Grace Catholic Academy as a school Taya could enroll in late in the school year.

“She loves him very much,” her mother said. “She has already made a lot of friends. She was even crying because she wasn’t used to so much attention.

Taya’s mother said they visited her and she immediately felt comfortable in the atmosphere. Principal Kelly Wolf said she told the girl there was no rush to start classes.

“I said, ‘You know, when you’re ready to come to school, our doors are open,'” the principal said. “We talked about what it would be like to go shopping in America and, of course, that’s what she did. And the first thing she bought was a Catholic school uniform.

“The next morning she and her mom showed up at my office door, and she was so excited she was wearing a plaid skirt because we have a plaid skirt. It doesn’t match exactly, but it’ll be fine. .

“She ended up having three boyfriends because the whole girl group wanted to be with her,” the manager said. “Needless to say, she’s been here ever since. She didn’t miss a day.

“She is so sweet and very innocent. She says very few English words, but she smiles a lot.

Taya understands a little English, which she has studied since first grade. In addition, the school’s Google Classroom software allows him to receive translations.

But her classmates are also eagerly helping her out, Wolf said.

“There are several students in my building who speak Russian or a Russian dialect that she understands,” Wolf said. “If they see that she doesn’t understand, someone who can speak Russian will lean over and tell her in her language.

Taya’s father had to stay in Ukraine because of a law that says men between the ages of 18 and 60 are needed in the country and cannot leave. His wife and daughter, meanwhile, are eager to find him.

Until then, “it’s not very safe for Taya to be in Ukraine right now,” her mother said. But for now, Taya is happy to be safe and with friends.

‘The Word’, recently published by Yvonne Blackwood, is a thoughtful discussion of the promise contained in God’s Word and the strength that can be drawn from following God’s way.