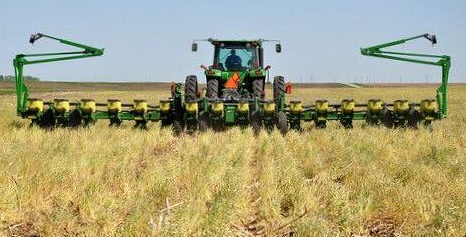 The National No-Till Conference will be held in Louisville in January, and the Kentucky Department of Agriculture says scholarships are available for new entrants to what is billed as the world’s largest no-till event.

No-till planting, a practice that first became successful in Kentucky, turns 60 in 2022. And for just the second time in its 30-year history, the National No-Tillage Conference, the event which celebrates and encourages no-till farming practices, will be held in Kentucky.

â€œWe are delighted to once again host the National No-Till Conference,â€ Agriculture Commissioner Ryan Quarles said. â€œEver since the practice was first successful in Kentucky in 1962, it’s only fitting that we host the conference that celebrates and encourages this agricultural performance, back home to where it all began. No-till planting has changed the way Kentucky farmers can work the land for the benefit of all. “

The idea of â€‹â€‹no-till farming had been studied for years, but it wasn’t until 1962 that Christian County farmer Harry Young had the first successful cash crop of no-till corn. Using a combination of herbicides and atrazine for weed control and a mule drill, Young harvested 0.7 acres of corn using this new method. It was a necessary method for Kentucky farmers who had soil erosion problems with regular farming practices on the state’s hills.

Sixty years later, more than 104 million US acres were in zero-tillage production, according to the 2017 Agricultural Census. Farmers are still eager to learn more about the practice. The national conference expects up to 1,000 participants.

It takes place January 4-7 at Galt House in Louisville, with information from leading no-till growers, agronomists, researchers and other experts, to help farmers get the most out of their farming system. without plowing.

To help farmers in Kentucky and other southern states take a more operational approach to their soil conservation practices, the Southern Sustainable Agriculture Research & Education program will provide scholarships to support farmers attending their first conference. national law on no-till.

“We are honored to announce this very first scholarship, which reflects the importance of healthy soils, continuing education on best conservation practices,” said Frank Lessiter, founding editor of No-Till Farmer. and the National No-Till Conference. The scholarship covers the full registration fee of $ 449. Visit www.no-tillfarmer.com/NNTCscholarship to apply.