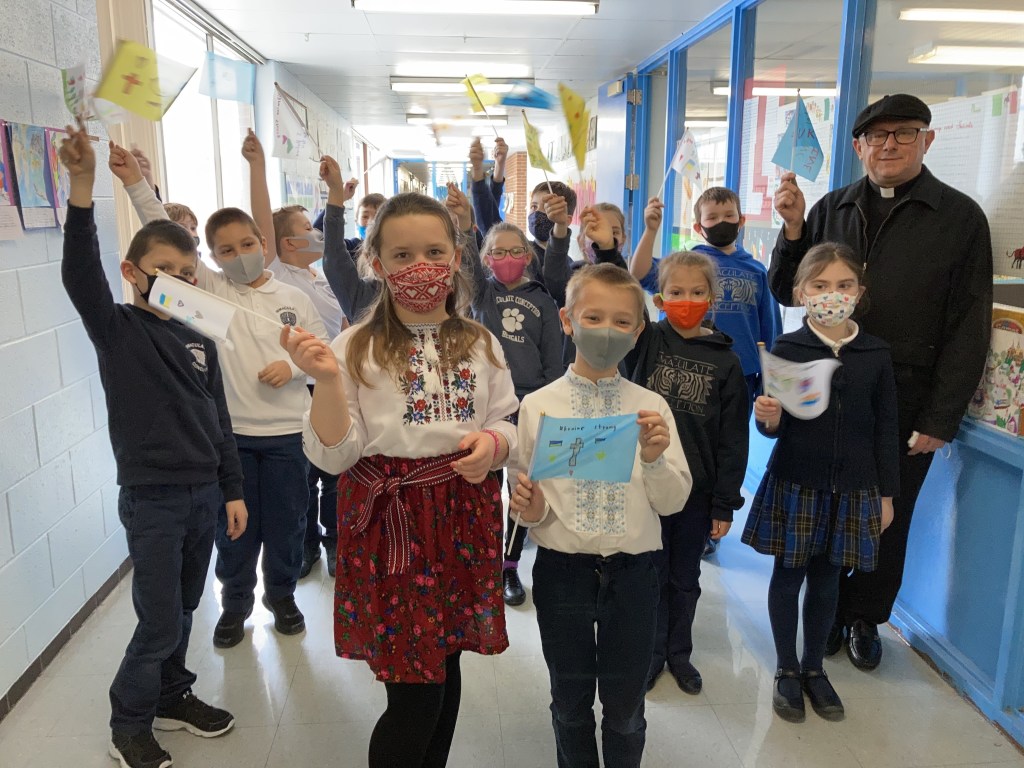 They’re just kids, but the students at Immaculate Conception Ukrainian Catholic School in Warren know all about Ukraine and what the Russian threat could mean for its people.

“There is an army of Russians around Ukraine and they are trying to make it their country. It would prevent Ukraine from being free and speaking its language,” said Sonya Lisowsky, a third-grade student at the school and one of many students wearing traditional Ukrainian clothing.

Monday was a special day for students and Lisowsky was dressed for it.

She and more than 200 other elementary school children – nestled in a neighborhood populated by many locals who immigrated to the US from Ukraine and still have family there – were making flags to raise awareness and show their support. to the homeland.

“I’m glad we’re doing this. We make the flags to let people know that Ukraine is in big trouble,” said Lisowsky’s classmate Stephan Pylypczak, who also wore traditional Ukrainian attire worn by his father when he was the age of Pylypczak. “My family has a lot of history in Ukraine and we want to help protect them from being taken over.

“I feel that I want to support Ukraine a lot,” he added.

Even kindergartners participated, and while they may not understand the politics involved, many of them are acutely aware that something wrong was going on.

“I guess they are exposed to conversations at home,” Shivaun Wois said, watching his students decorate their flags with hearts and peace signs. “We just want to reassure them, we are safe here.”

Down the hall, in Martha Spain’s eighth grade classroom, at least one student has chosen to express her thoughts in the language her ancestors treasured and fought to speak.

“It means, ‘Glory for Ukraine. Glory for heroes,’” Victoria Mudra said, pointing to several lines on her flag. “It shows patriotism for Ukraine and it gives hope to the people in these times. .”

Mudra has lived in the United States all her life, but has visited her family in Ukraine since its independence when the Soviet Union broke up some 30 years ago.

“They’re stressed about what’s going to happen to their country and their freedom,” she said. “America should support Ukraine because they are people like them and they want the same things.”

If Russia takes these freedoms, they will disappear.

“With democracy, people control their lives, but with Russia, one person or a group decides what happens to everyone,” she said, explaining what she knows about democracy and the Communism.

“America should show its support for Ukraine,” said the 13-year-old who was born in Ukraine and lived there until he was 7. “We should be aware of all the conflicts in the world, because they could turn into something bigger.”

“I don’t think it will happen – I hope not – but it is possible,” added Melnychuck, whose father was a former police officer in Ukraine.

“These students have traveled the world. It shows in the way they think and talk,” said Spain, the eighth-grade teacher. “Some of them know five languages ​​and have family who lived in Ukraine when it wasn’t free.”

So they know what can happen to the people if Russia takes power.

Others have family members who have returned to their home countries to ensure this does not happen.

“We had parents who actually went back to Ukraine,” said Mary Ann Gruda, the school principal, who started her teaching career as a substitute teacher for the school and came back. because of its family atmosphere. “They served in the military and felt the need to come back and perform their duties again.”

On Monday, international efforts to defuse the standoff over Ukraine intensified with French President Emmanuel Macron speaking with Russian President Vladimir Putin in Moscow while German Chancellor Olaf Scholz was in Washington, DC to coordinate politicians as fears of a Russian invasion mounted. Macron said on Tuesday that Russian President Vladimir Putin had told him that Moscow would not escalate the crisis further.

Meanwhile, around 100,000 Russian troops still in place along the border have fueled concerns of a possible takeover. White House national security adviser Jake Sullivan warned Sunday that Russia could invade “any day.”

Should that day come, they would be greeted by an army of men and women – bakers, dentists, carpenters, teachers and parents – who have abandoned their civilian lives to wage a guerrilla campaign against a military giant.

“They are the people’s army,” said Father Daniel Schaicoski of the Ukrainian Catholic Church of the Immaculate Conception, encouraged by the stance people are taking in Kharkiv. “That’s what will keep Putin away from Ukraine.”

The country’s second-largest city is about 40 km from the Russian border and is home to one of Ukraine’s largest industrial centers, including two factories that restore old Soviet-era tanks or build new ones .

It is also a divided city: between people who speak Ukrainian and those who remain with Russian which dominated until recently; between those who enthusiastically volunteer to resist a Russian offensive and those who just want to live their lives. Which team wins in Kharkiv may well determine the fate of Ukraine.

“The city must be protected,” said Victoria Balesina, who teaches table tennis to teenagers and dyes her cropped hair dark purple on the crown. “We have to do something, not panic and fall to our knees. We don’t want that.

Russia has denied plans to attack its neighbour, but calls on the United States and its allies to ban Ukraine and other former Soviet countries from joining NATO, halt weapons deployments there and roll back NATO forces from Eastern Europe.

Washington and NATO have since rejected those demands.

NATO is only one of Russia’s concerns.

“Ukraine has land and natural resources,” said Schaicoski, who is Ukrainian but grew up in Brazil before moving to the United States. “The universities are flourishing and even the roads are better. Most of the country is still poor, but Ukrainians can travel to Poland and Italy to earn money.

Then there is the influence of foreigners.

Many Ukrainians who live in the United States and other democratic countries visit family members in Ukraine. Of course, when they’re around, they talk about their lives and how good capitalism is, and not bad as the Russians would have them believe. Then they tell them about the jobs they do and the houses they are able to build.

Ukrainians have also become stronger and more determined to make things better by taking matters into their own hands, protesting against unfair practices and exposing corruption.

It is these Western ideals and the support Ukrainians receive from outside the country that Russia also fears.

“It’s our family atmosphere that keeps our school together by welcoming Ukrainians as well as students and families of all nationalities,” Gruda said. “Keeping in mind that families support each other, now is the time to show our support for our overseas ‘family’ in Ukraine. The making of these flags is a symbol of our love and support for those people in Ukraine who need strength and prayers. It is a way for our children, who may be young but strong in conscience and support, to share their patriotism for what our families are going through miles away, hoping for a peaceful end.

The Immaculate Conception Ukrainian Catholic Church and School (ICUCC) was established in Hamtramck in 1936 to provide denominational education to the growing number of families arriving in Michigan. When it outgrew its location, a new one was established in Warren, which draws students and parishioners from the Detroit metro area.

There are currently around 1 million Ukrainians living in the United States, according to a report by Ukrainian Weekly.

The Ukrainian-American Michigan Crisis Response Committee is hosting an event in support of Ukraine at the Ukrainian Cultural Center in Warren at 2 p.m. on February 20. The center is located at 26601 Ryan Rd., Warren.

The Associated Press contributed to this report.

There is no place for hate in Christianity