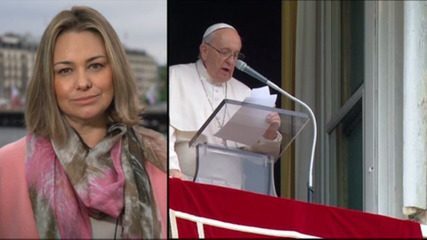 Who is Kirill, the pro-Putin Orthodox Christian leader? Ukraine and Russia

Patriarch Cyril, leader of Russian Orthodox Christians since 2009, has put his church at the service of President Vladimir Putin, who shares his ambition with Russia Conservative and powerful, he supports Moscow’s offensive in Ukraine.

For many years, the 75-year-old religious leader has not hesitated to appear with the blessing of guns and missiles, or to justify the crackdown on dissent and independent media.

The pope told Italian newspaper Corriere della Sera that the patriarch “cannot become Putin’s altar child”. The Orthodox leader said in a statement that Francis used “bad language” to refer to him in this way. The Orthodox Church called the incident “unfortunate”.

Russian President Vladimir Putin kisses Kirill and the Patriarch of Moscow and All Russia during the ceremony in 2013 (Image: REUTERS/Maxim Shemetov)

Kirill, like Putin, also views Ukraine and Belarus as “sister” states that should remain under the Moscow flag, not as separate states.

The patriarch multiplied the declarations in favor of the Russian attack in Ukraine. The European Commission wants to impose sanctions on him, as it did with Putin and several Russian officials.

On February 27, three days after the invasion, Kirill described the “forces of evil” as critical of Russian ambitions in the neighboring country. In April, he called on Russians to “stand together” to fight “enemies abroad and at home”.

Pope Francis, the head of the Roman Catholic Church, spoke with Kirill in March, when he urged the patriarch to “don’t use politics, use Jesus.”

Kirill’s support for Vladimir Putin was no surprise.

Pope Francis and Patriarch Kirill, head of the Russian Orthodox Church, at a historic meeting in Cuba in 2016. Francis decided to cancel another meeting between them due to Kirill’s pro-war positions – Picture: Reuters

Kirill, who succeeded the late Patriarch Alexy in 2009 – who rebuilt the church after the fall of the Soviet Union and its atheist regime – transformed Russian Orthodoxy into a religious political machine at the service of the Kremlin.

In 2012, clerics said Putin’s rule was a “miracle of God” after the post-Soviet crisis of the 1990s, AFP reported.

The same year, an event illustrates the conservative attitude of this devotee with a gray beard.

Four young men in masks, who were part of the Basque band Pussy Riot, entered the Cathedral of Christ the Savior, Moscow’s main one, to sing an anti-Putin song.

Three of them were arrested and sentenced to heavy prison terms.

Moscow: there is no agreement for a meeting between the pope and Putin

Kirill rejected the pardon requests, calling the decision “blasphemous”. He assured that “the devil laughs” sometimes. Since then, he remembers it regularly The Orthodox Believer Should Never Protest.

For him, the large demonstrations which followed the arrest of opponent Alexei Navalny in January 2021 revealed a “crisis of the young generation”.

Critic of homosexuality, he is an admirer of Vladimir Putin’s sought-after law prohibiting the “propaganda of homosexuality of minors”, the texts of which are considered by many NGOs as a tool of homophobia.

Unlike his grandfather, a priest, victim of Stalinist oppression, Kirill – by his civil name Vladimir Gundiaev – found his place in the ecclesiastical apparatus during the Soviet era, under the regime.

In 1965, when he was 19, he entered the theological school in his hometown of Leningrad (now Saint Petersburg) and became a monk four years later.

This path raised doubts about close ties to the KGB, the Soviet intelligence service. The communist bloc’s repressive apparatus of the time relied on the ecclesiastical establishment to spy on believers.

Katelyn Kramer is a salutatorian and leader in her promotion

The Relics of Blessed Carlo Acutis Find Refuge in the Diocese of Trenton, New Jersey