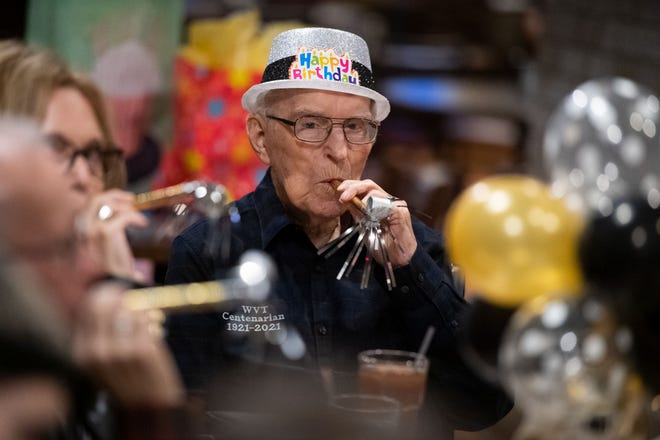 From the 40-acre family farm in Baroda, Michigan, it took William Tollas 3Â½ miles – round trip – to walk to school each day. And that’s exactly what he must have done, because in the early 1930s there weren’t many other means of transportation for a Midwestern farmer’s son.

This hike was made a bit faster when Tollas started high school. As he saw more and more cars populating the dirt and concrete strips of the road in and around Baroda – and even a classmate driving to class – Tollas made do with his own transportation: a old pair of roller skates.

Tollas, who turned 100 on November 2, has been through a lot during his century on this planet. In 1945, as a member of the US Army’s 3008 Grave Registration Company, he spent a year in Okinawa, Japan, overseeing the burials of fallen US soldiers.

Tollas’ company crossed the Hawaiian Islands on their way to Okinawa. There he saw the wrecks of ships and tankers still floating in the water following the bombardment of Pearl Harbor by Japan in 1941.

It was a memory that lasted his entire life.

His daughter Chris Linville saw the repercussions of this shock 50 years later.

â€œWhen the movie (‘Pearl Harbor’ in 2001) came out we took mom and dad, I didn’t think twice,â€ Chris said. “They were both in tears before the end. You could hear a fly flying in this theater.”

After Tollas left the service, he and his wife, Mary, went to Eden Theological Seminary in Webster Groves, Missouri, so that Tollas could keep a promise he made to God: if he stayed in security during his military service, he would join the Christian ministry.

Over the next 50 years, Tollas ministered in a multitude of places across the Midwest. His family grew along the way.

The first stop was in 1950 at Troy-Moscow Mills Parish in Lincoln County, Missouri. There, he and Marie adopted a daughter, whom they named Christine. Then came another adopted daughter, Linda, then Marie became pregnant with their third child, a daughter they named DeeAnn.

The Tollas family will spend 15 years at Buckskin before returning to Evansville, where William becomes chaplain at the Good Samaritan Home. In 1987, at the age of 65, William retired. Briefly. He was working again as a pastor in Lynnville in 1991, where he would stay until his retirement – for real this time – in 2000 at the age of 80.

Tollas said he saw changes in younger generations’ interest in the church.

â€œI think churches are not as active now as they once were,â€ Tollas said. “The younger generations I worked with were more receptive to the church’s message than they are today.”

After 50 years in the ministry, a year on the typhoon-swept beaches of Okinawa and countless time walking the dirt roads in Baroda, Tollas had another big obstacle on his way to 100: COVID-19.

He contracted the virus in October, just months after a nasty fall in the elevator at his nursing home left him with a fractured cervical bone that doctors call the “hangman’s fracture.” He spent three months in a cast on his neck.

Three weeks after removing the cast, he contracted COVID. For people in the Tollas age group, COVID is much more likely to be a death sentence.

He spent two nights in the hospital. Her daughter DeeAnn Moore was not surprised at her resilience.

â€œIt really zapped her energy,â€ she said. “But we praise God that it was no worse than before and that he is doing well.”

Tollas is a little surprised at his good health.

â€œRick was just calculating how many times my heart has beaten in the past 100 years,â€ Tollas said. “Millions, millions of times, and for a heart to keep beating that long, it’s just amazing.”

How a tweet became a scholarship honoring the military at UT